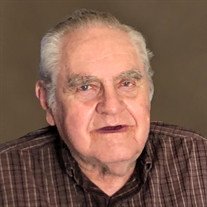 Private family services will be held with interment at East Lawn Memorial Gardens in Bloomington. Kibler-Brady-Ruestman Memorial Home in Bloomington is assisting the family with arrangements.

Memorial contributions may be left to Christ Lutheran Church of Normal.

He was preceded in death by his parents, wife, and brother, Glenn Christensen.

Al became a member of Christ Lutheran Church in 1966 where he served in several positions.

He worked for GTE for over 40 years and worked in various roles. When he retired in 1988 he was serving his role as a supervisor for switching systems in the Wisconsin and Illinois area. During retirement, he was hired by the Town of Normal and assisted as a crossing guard by Colene Hoose Elementary School, he was known by many as "Crossing Guard Al."

Al proudly served his country during the Korean Conflict as a member of United States Army. He was a loving husband, father, grandfather, and great-grandfather and will be missed by many.

To send flowers to the family or plant a tree in memory of Al Christensen, please visit our floral store.

To send flowers to the family in memory of Al Christensen, please visit our flower store.
Send a Sympathy Card