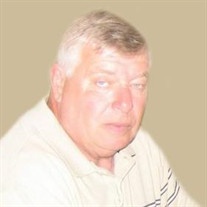 Hudson - Donald E. Whitwood, Jr., 70, of Salt Springs, Florida, formerly of Hudson, passed away at 11:49 a.m. on Friday, August 3, 2018 at Putnam Community Medical Center in Palatka, Florida.
His memorial service will be held at 2:00 p.m. on Saturday, August 11, 2018 at Hudson United Methodist Church in Hudson with Rev. Dr. Curt Keller and Jason Collins officiating. Visitation will be held one hour prior to the service at the church. Military rites will be accorded by the Air Force Honor Guard Unit. Cremation rites have been accorded. Kibler-Brady-Ruestman Memorial Home in Bloomington is assisting the family with arrangements.
Inurnment will be at Hudson Township Cemetery in Hudson. Memorials may be made to the Fisher House Foundation.
Don was born September 17, 1947, in Bloomington, a son to Donald E. and Hilda Sprehe Whitwood, Sr. He married Lois Newby on March 17, 2018. She survives.
Surviving is his wife, Lois Whitwood; children, Randi (Jeff) Weber of Gillette, WY, Jamie (Stacey) Whitwood of Maplewood, MN, and Donald (Jamie) Whitwood III of Heyworth; twelve grandchildren; six great grandchildren; brother, Jim (Diane) Whitwood of Towanda; and sister, Nancy (Eugene) Williams of Ellsworth.
He was preceded in death by his mother and father.
Don proudly served his country in the United States Air Force from 1966 till 1972.
Online condolences and memories of Don may be left for his family at kiblerbradyruestman.com.


To send flowers to the family or plant a tree in memory of Donald E. Whitwood, please visit our floral store.

To send flowers to the family in memory of Donald Whitwood, please visit our flower store.
Send a Sympathy Card