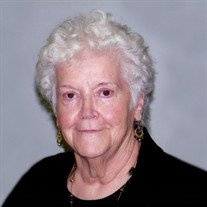 Bloomington - Dorothy B. Lockenvitz, 91, of Bloomington passed away at 9:35 a.m. on Sunday, June 3, 2018 at the home of her daughter in Delavan, Illinois.
Her Mass of Christian Burial will be at 10:00 a.m. on Saturday, June 9, 2018 at St. Mary's Catholic Church in Bloomington with Fr. Greg Nelson officiating. Visitation will be one hour prior to mass at the church.
Inurnment will be in St. Joseph's Catholic Cemetery in Bloomington. Memorials may be directed to St. Mary's Catholic Church, Bloomington, Ilinois, Multiple Sclerosis Society or OSF Hospice.
Dorothy was born on January 12, 1927 in Bloomington, a daughter to Frank X. And Mary Ann Lee Glaser. She married Paul A. Richter and later married Harold D. Lockenvitz.
Surviving are her daughter, Christine (Tyler) Abercrombie of Delavan, son, Paul Richter of Bloomington and son-in-law Dennis Brownfield of Columbia, MO; grandchildren, Michelle and Tyler Andrew (Karol) Abercrombie, Triston (Angela) Brownfield of Columbia, MO and Jeremy Richter (girlfriend, Melissa Hook) of Heyworth, Andrew Richter of Bloomington and Jessica (Mason) Ross of Bloomington; great grandchildren, Grace and Drew Brownfield, Andrew James Abercrombie, Matthew and Haley Richter, Lucas and Alaina Ross.
She was preceded in death by her parents; her husbands; a daughter, Kathy Brownfield; a brother, Frank X. Glaser; two sisters, Madeline Walsh and Mary Francis Thompson.
Dorothy was born and raised in Bloomington and graduated from Trinity High School. She was a medical assistant for several doctors including starting the practice with Dr. John Stutzman.
She was a life long member of St. Mary's Catholic Church in Bloomington where she served as coordinator for the prayer network for parishioners and also a member of the Church Altar and Rosary Society. Dorothy was in Cursillo #80 Class , Faith in Action and also a member of Red Hat Society.
Dorothy loved her family and her many friends, she will be greatly missed.


To send flowers to the family or plant a tree in memory of Dorothy B. Lockenvitz, please visit our floral store.

To send flowers to the family in memory of Dorothy Lockenvitz, please visit our flower store.