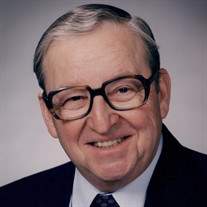 His Mass of Christian Burial will be at 10:00 a.m. on Thursday, October 22, 2020 at Holy Trinity Catholic Church in Bloomington with Father Jeff Stirnaman and Monsignor Doug Hennessey officiating. Military rites will be accorded by the Bloomington-Normal American Legion Honor Guard. It is recommended that those in attendance practice social distancing. Kibler-Brady-Ruestman Memorial Home is assisting the family with services.

Interment will be at East Lawn Memorial Gardens in Bloomington. In lieu of flowers, memorials may be directed to a charity of the donor's choice or to Holy Trinity Catholic Church.

George was born on July 31, 1930 in Madison, Illinois, a son to William and Ruth (Olsson) Noud. He married Anne L. Pagel on April 27, 1968 at Holy Trinity Catholic Church in Bloomington. She survives.

He was preceded in death by his parents, seven brothers, and two sisters.

George received his degree of Business Administration from Southern Illinois University. He went on to work for State Farm Insurance Companies in Underwriting and Management Planning for 38 years, retiring in 1996. While working he was a member of various professional organizations, including the National Association of Business Economists.

George was a member of Holy Trinity Catholic Church, where he was part of the St. Vincent DePaul Society. He proudly served his country during the Korean War in the United States Army.


To send flowers to the family or plant a tree in memory of George H. Noud, please visit our floral store.

To send flowers to the family in memory of George Noud, please visit our flower store.