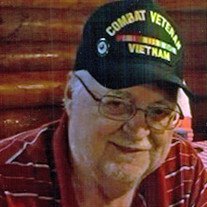 Bloomington - Geza "Rick" R. Haydu, 75, of Bloomington, passed away at 1:45 a.m. on Sunday, October 11, 2020 at McLean County Nursing Home in Normal.
His memorial service will be held at a later date. Kibler-Brady-Ruestman Memorial Home in Bloomington is assisting the family with arrangements.
Memorial contributions may be left to the American Diabetes Association or to the Vietnam Veterans of America.
Rick was born on October 21, 1944 in Milwaukee, Wisconsin, a son to Geza Jack and Jolene (Miller) Haydu. He married Judith Huelskamp on June 20, 1970 in Waterford, Wisconsin, she survives.
Also surviving are his children, Thomas Haydu of Holland, Michigan, Tammi (Tom) Woods of Rockford, Michigan, Dawn Haydu of Bloomington, and Darren (Becky) Haydu of Heyworth; grandchildren, Tyler, Nyda, Jordin, and Austin; and grand-dogs, Einstein and Ryleigh.
He was preceded in death by his parents.
Rick proudly served his country during the Vietnam War from 1963-1964 as a Sergeant in the United State Army. He was honored to go on the honor flight.
In his spare time, Rick enjoyed casinos, hunting, and fishing, he even caught a World Record muskie. He was also a fan of the Milwaukee Brewers and Green Bay Packers.

To send flowers to the family or plant a tree in memory of Geza "Rick" R. Haydu, please visit our floral store.

To send flowers to the family in memory of Geza Haydu, please visit our flower store.
Send a Sympathy Card