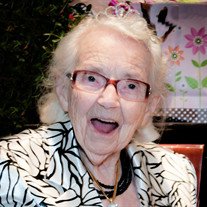 Iona Ruth (Heuerman) Lueck, beloved wife and mother, passed away November 1, 2019 in the Woodlands, TX at the age of 107 years. A resident of The Woodlands, Texas since 2005, she was born March 18, 1912, the second daughter of Heye and Anna Kreider Heuerman of Shannon, IL. She was preceded in death by her husband, Dr. William R. Lueck, of Normal, IL, her parents, older sister Evelyn Snavely, also of Shannon, and younger brother, Chester Heuerman of Austin, Texas.

Iona was the last living member of the Shannon, IL High School class of 1930, and was a teacher at Glendale Elementary School in East Peoria, IL during the 1930's. While furthering her education at Illinois State University, she met Dr. Lueck and they were married on May 3, 1942. Both she and Dr. Lueck were civilian instructors for the Army Air Corps at Truax Field, in Madison, WI during World War 2. In May, 1945, Iona graduated from Illinois Wesleyan University, and became a significant part of the community of the First Methodist Church of Normal where she was an active member until she moved to The Woodlands, TX in 2005.

At her request, she will be laid to rest beside her husband in the Funk's Grove Cemetery in a private service.

To send flowers to the family or plant a tree in memory of Iona Ruth Lueck, please visit our floral store.

To send flowers to the family in memory of Iona Lueck, please visit our flower store.
Send a Sympathy Card