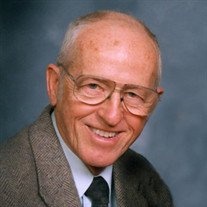 A memorial service will be planned in the future. In lieu of flowers, memorial gifts may be made to Mennonite Central Committee, Bethel College (KS), or Habitat for Humanity. Kibler-BradyRuestman Memorial Home in Bloomington is assisting the family with arrangements.

John was born on May 28, 1929 in Pontiac (IL) to Arthur and Emma Eymann Bertsche. He graduated from Pontiac High School in 1947, and continued working on the family farm until February 1952, when he began a community development service assignment in Gulfport (MS) through Mennonite Central Committee (MCC), which fulfilled his alternative military service requirement.

He graduated from Bethel College (KS) on the morning of May 26, 1958. That evening he married his classmate, Evelyn Dyck, at the Bethel College Mennonite Church. Their two children, Cynthia and Daniel, were born in Chicago where John attended medical school (University of Illinois) and completed his internship (Cook County Hospital). From 1964-66, the family lived in Haiti, where he served as medical director of Hôpital Grande Rivière du Nord, a rural health facility operated jointly by MCC and Haiti's Public Health Service. Upon their return to the U.S., and following a three-year medical residency at Northwestern University, he and his family moved to Bloomington-Normal, where John practiced Internal Medicine until his retirement in May 1998.

John and Evelyn served as host family for nearly 40 overseas visitors, mostly ISU students. An avid runner and cyclist, John ran 13 marathons, four of which he completed in under three hours. Each June from 1996 through 2013, he participated in Biking Across Kansas (BAK) with various family members and friends. During retirement, he was a frequent volunteer with Habitat for Humanity and served as a mediator at the McLean County small claims court. In recent years he cared for his wife as her health declined and helped several immigrant Congolese families adapt to life in Bloomington-Normal.

He was an active member of the Mennonite Church of Normal, a lifelong fan of the Chicago Cubs, a loyal driver (and proactive maintainer) of Dodge cars, an enthusiastic supporter of his college alma mater, and a committed environmentalist who over more than three decades collected and recycled untold tons of aluminum cans.

He was preceded in death by his brother, Paul Bertsche; sister, Adele Reichert; and brothers-in-law, Charles Suderman, Gordon Dyck, and Gerald Dyck.

To send flowers to the family or plant a tree in memory of John Arthur Bertsche, please visit our floral store.

To send flowers to the family in memory of John Bertsche, please visit our flower store.