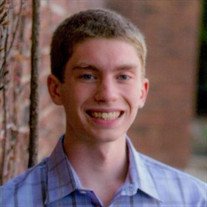 Bloomington - Joshua "Josh" A. Immke, 23, of Bloomington, passed away at 2:30 a.m. on Sunday, August 23, 2020 in Madison, Wisconsin.
A private family service will be held at First United Methodist Church in Normal. In lieu of flowers, memorials may be made to Path Crisis Center in Bloomington. Kibler-Brady-Ruestman Memorial Home in Bloomington is assisting the family with arrangements.
Josh was born on December 10, 1996, in Bloomington, a son to Mark and Lori (Koenecke) Immke. He was raised in Bloomington where he graduated from Normal West High School with the class of 2015. He excelled in his academics and was a member of the National Honor Society. During high school, he was a member of the football and track team. He also played the cello and was a member of the school orchestra. Josh was the recipient of many awards and recognized for many of his high school accomplishments.
Josh graduated Magna Cum Laude from Illinois Wesleyan University with his bachelor's in Chemistry. While there he also received the distinguished award of Chemistry Student of the Year, an award presented by the Chemistry Faculty. Josh also was a member of IWU's track team where he ran hurdles and received his varsity letters.
Josh then enrolled at the University of Wisconsin, in Madison, Wisconsin to pursue his Ph.D. in organic chemistry. He was loved by all that knew him. Josh cherished and loved his family and friends.
Surviving are his parents, Mark and Lori Immke of Bloomington; brother, Andrew J. Immke of Bloomington; sister, Rachel L. Immke of Bloomington; maternal grandparents, Dr. William H. and Marcia Koenecke of Kentucky; and aunts & uncles, Lynne Koenecke (Clif) Whitley, Loganville, GA and their children Austin, John, Lauren, Tyler, William H Koenecke, Jr. (Heather) Murray, KY and their son Mica, Pamela E Immke (Thomas) Schahrer, Forrest, IL and their son Scott, Donald P Immke (Dora) Pontiac, IL and their sons Aaron (Ashley), Adam (Breanne), and 2nd cousin Vivian.

He was preceded in death by his paternal grandparents.

To send flowers to the family or plant a tree in memory of Joshua "Josh" A. Immke, please visit our floral store.

To send flowers to the family in memory of Joshua Immke, please visit our flower store.
Send a Sympathy Card