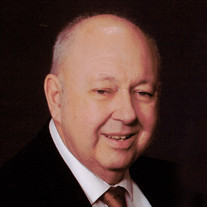 His funeral service will be at 11:00 a.m. on Saturday, December 10, 2016 at Calvary United Methodist Church in Normal with Pastor Randy Reese officiating. Visitation will be from 5-7:00 p.m. on Friday and 10-11:00 a.m. on Saturday, both at the church. Kibler-Brady-Ruestman Memorial Home in Bloomington is assisting the family with arrangements.

Interment will be at East Lawn Memorial Gardens in Bloomington. Memorials may be made to LIFE Center for Independent Living 2201 Eastland Drive, Suite 1, Bloomington, IL 61704.

Larry was born on November 19, 1942 in Chicago Heights, Illinois, a son to Forrest and Anna P. Hamilton Littell. He married Nancy Bergmann on August 1, 1964 in Beloit, Wisconsin.

He is preceded in death by his parents and a brother, Alan Littell.

Larry was a graduate of Illinois Wesleyan University in Bloomington and later received his masters from Illinois State University in Normal. He taught as a jr. high math teacher in District 87 where he developed the outdoor education program, of which he was involved with after his retirement.

Larry enjoyed traveling with his family across the United States and foreign countries. He was a generous volunteer with his time and talents and a strong advocate for those with special needs. He was a life long learner who inspired many.


To send flowers to the family or plant a tree in memory of Larry Littell, please visit our floral store.

To send flowers to the family in memory of Larry Littell, please visit our flower store.
Send a Sympathy Card