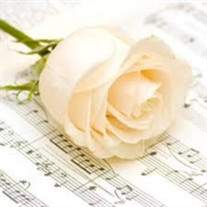 Mary Jean Nicholas, 87, passed away peacefully on August 24, 2020, of a pulmonary embolism following years of debilitating dementia. She was born on December 8, 1932, in Gillette, WY, the daughter of William Andrew and Margaret (Vasey) Nicholas.

Her educational background includes bachelor's and master's degrees in music education from the University of Portland, OR and a PhD from the University of Kansas, followed by a clinical position with the developmentally disabled at Lakemary Center in Paola, Kansas. In 1968, at the invitation of the Juilliard Repertory Project (JRP), she presented a concert with elementary school children using JRP-prepared material for music teachers in attendance at the Music Educators National Conference.

Mary was the former editor (for three years) of the Journal of Music Therapy, the major publication of the National Association for Music Therapy (NAMT).

She joined the faculty at Illinois State University in 1980, after seven years as Director of Music Therapy at the College of Saint Teresa in Winona, MN.

Her retirement years were spent in Bloomington, IL.

Mary was preceded in death by her brother, William Andrew II, and sister-in-law Suzanne.

She is survived by her beloved sister, Kay, of Albany, NY, and her brothers Neil of Seattle, WA and Joseph and his wife, Lorraine, of Deer Park, WA.

Mary's family would like to thank her friends and neighbors who helped keep an eye on her as Mary's memory failed in her later years, especially the staff at Heritage Manor Normal and St. Joseph Medical Center for their recent excellent care of our sister.

To send flowers to the family or plant a tree in memory of Mary Jean Nicholas, please visit our floral store.

To send flowers to the family in memory of Mary Nicholas, please visit our flower store.