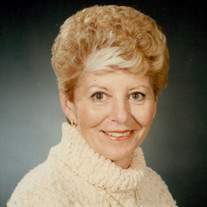 In lieu of flowers memorial contributions may be directed to the Alzheimer's Association, ALS Association, or the American Cancer Society. Kibler-Brady-Ruestman Memorial Home is assisting the family with arrangements.

She was preceded in death by sons, Barry and David; daughter in law Pat, and a brother Ralph "Jupe" Mars Jr.

Noleen was employed as a receptionist at McLean County Bank for over 10 years before she became a part of Jacobs Insurance Agency in 1962. She was the office manager for 43 years, retiring in 2005. Noleen was a past member of the Women's Golf Association.

She was an avid golfer and participated in many Bloomington/Normal Women's Golf Championships. Noleen was a loving mother, and grandmother and she will be greatly missed.


To send flowers to the family or plant a tree in memory of Noleen Jacobs, please visit our floral store.

Please click here to view the video tribute
To send flowers to the family in memory of Noleen Jacobs, please visit our flower store.