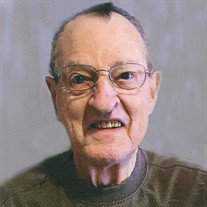 A private Celebration of Life will be held at a later date. Kibler-Brady-Ruestman Memorial Home in Bloomington is assisting the family with arrangements.

He was preceded in death by his parents; brothers, Max and John; and sisters, Betty and Mary.

Dick excelled in high school, where he was elected class president, played cornet in the band, and competed on the school's basketball and track teams

At Southern Illinois University, he met his future wife and earned a Bachelor's degree in English. Dick also earned Master's and Doctoral degrees in English at the University of Colorado. He taught briefly at University High School in Normal before teaching at Illinois State University, where he earned the rank of Associate Professor.

After retiring, he wrote and published "Kill Now, Talk Forever," a detailed account of the 1921 Sacco and Vanzetti trial. The book unearthed new evidence on the case, earned critical praise, and has been adopted by libraries across the country.

Dick enlisted in the United States Navy in 1944. He proudly served during WWII on the U.S.S. Bennington in the South Pacific Ocean.

He was a loving husband, father, grandfather and friend, he will be missed by all.

To send flowers to the family or plant a tree in memory of Richard 'Dick' L. Newby, please visit our floral store.

To send flowers to the family in memory of Richard Newby, please visit our flower store.