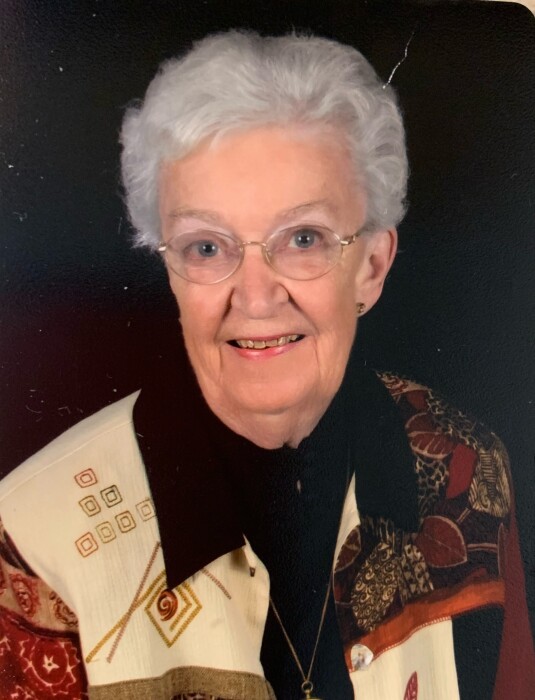 Rosemary Dustman was born May 30, 1928, in Wapakoneta, Ohio, and passed away peacefully at home on May 7, 2022.  Her Celebration of Life will be held on June 2, 2022, in Marquis Chapel at Second Presbyterian Church, Bloomington, Illinois. Visitation will be at 9:30 a.m. with the service following at 10:00 a.m at the church. Kibler-Brady-Ruestman Memorial Home in Bloomington, Illinois is assisting the family with arrangements. She will be accorded cremation rites with interment in Funk’s Grove Cemetery. Preferred memorials are the Humane Society of Central Illinois or a charity of choice.

Rosemary was preceded in death by her parents, Jonas (Joe) and Ruby Wolfe Dustman, her brother, William Dustman of St. Marys, Ohio and lifelong companion, Betty Keough of Bloomington, Illinois. She is survived by her sister-in-law, Ruth Dustman of St. Marys, Ohio, and five nieces: Kristine (James) Vanderhorst, Kathryn Molk, Karen (Donald) Raymond, Nancy O’Hara and Linda (Thomas) Toerner, 15 great nieces and nephews, 28 great-great nieces and nephews and one great-great-great niece. She is also survived by special friend Donna Chiles as well as many beloved friends in Bloomington-Normal and in other states. Rosemary was a member of the Second Presbyterian Church in Bloomington, Illinois.

Rosemary (better known as “Dusty”) lived much of her childhood and early youth in Ohio and Indiana. She attended schools in Van Wert and Celina, Ohio, and graduated from Muncie Central High School in Muncie, Indiana in 1946. Rosemary graduated from Ball State University in 1949 with a Bachelor of Science Degree. She taught one year in Connersville, Indiana and the next year was awarded an assistantship at Indiana University, Bloomington, Indiana where she graduated with a Master of Science Degree in Pupil Personnel Services. In later years, she did post-graduate work at Illinois State University, the University of Illinois and University of Iowa. In 1951 she began teaching in the Bloomington Public School system where she served as a teacher, counselor and administrator for 34 years, retiring in 1985. Twenty of those years she served as Supervisor of Pupil Services for grades K-12.

During her years in the Bloomington schools, Rosemary served on a multitude of committees and task forces for the Illinois State Board of Education. She was a co-consultant for the publication “Pupil Personnel Services Recommended Practices and Procedures Manual” which was distributed to administrators, social workers, counselors, school psychologists and nurses throughout the public schools in Illinois. She was honored by her professional colleagues by being selected Administrator of the Year in 1975 by the Illinois School Counselors Association and in 1985 by the Illinois State Board of Education “in appreciation of her valuable contributions to the Pupil Personnel Services field.”

Other activities include serving as co-chairman of convention planning for the 1972 Illinois Guidance and Personnel Association Convention in St. Louis, Missouri and secretary and president of the Illinois Counselor Education and Supervisors Association. She gave many presentations at conventions and to local service groups. She served on the Bloomington Public Library Board, the Mental Health Board and the Second Presbyterian Church Day Care Center Board. For two years after retirement, Rosemary taught and supervised practicum for guidance and counseling graduate students at Illinois State University. She was a founding member of the Women to Women Giving Circle of the Illinois Prairie Community Foundation and was a continuing contributor up until her death.

In 1985, the Rosemary Dustman Scholarship fund was established by professional colleagues, friends and family upon her retirement.  Each year, a Bloomington High School graduate received a scholarship to help them attend a university, junior college, or vocational/technical school.

In 2007, Rosemary was honored by being inducted into the Bloomington District 87 “Hall of Fame.” The “Hall” was established for the first time as part of the District’s Sesquicentennial celebration. Each year a selection committee chooses ten people who they deem to have made significant contributions to the school district.

Dusty had many leisure-time interests as well. She enjoyed reading, gardening, caring for her dogs, attending concerts and musicals. She sang in the Sweet Adelines for a few years and for many years, was an avid league bowler. Family gatherings in Ohio and visits with her parents in Florida were very special. In retirement, she enjoyed some winter time in Florida with friends. She kept in touch with friends across the country and relished occasional visits. She loved the leisure of Wisconsin in the summer where she owned a lake home with several friends on Red Cedar Lake in Birchwood, Wisconsin. There she enjoyed boating, golfing, swimming, fishing, walking, playing Euchre and attending art fairs in the summer and cross-country skiing in the winter.

The family would like to thank Carle Hospice and Synergy Home Care, especially caregivers Lori Levitt and Cyndy Remmers for their professional and loving care.

Dusty’s Christian faith was deep and quiet. She lived it out every day especially in caregiving and concern for others. She will be missed but she is now joyous and carefree in the presence of her Lord.

To send flowers to the family or plant a tree in memory of Rosemary Dustman, please visit our floral store.

To send flowers to the family in memory of Rosemary Dustman, please visit our flower store.