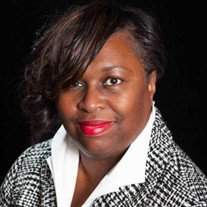 Normal - Susan M Gibson, 52, Normal passed away at 4:20 p.m. Friday, March 24, 2017 at Heartland Manor Care in Normal, Illinois.
Her funeral service will be at 1:00 p.m. on Saturday, April 1, 2017 at Center For Hope Ministries in Bloomington with Bishop Larry Taylor officiating. Visitation will be from 11:00 a.m. until 1:00 p.m. prior to the service at the church. Kibler-Brady-Ruestman Memorial Home in Bloomington is assisting the family with arrangements.
Interment will be in Evergreen Memorial Cemetery in Bloomington, IL. Memorials may be made to the Aleeah Murkey Scholarship Fund c/o Center For Hope Ministries, 14940 Old Colonial Rd., Bloomington, IL 61705.
Susan was born on February 17, 1965 in Buffalo, New York, a daughter of Robert Jackson and Carolyn Morris. She married Edward Gibson, Jr. in 1989 in Lockport, New York.
Surviving is her husband Edward Gibson and her children, Daniel Gibson and Rhea Gibson, all of Normal. Also surviving is her father, Robert Jackson of Buffalo, New York; her mother-in-law Jacqueline Gibson of Lockport, NY, close friends, Sheila Reynolds of Atlanta, GA and Pamela Roberson of Normal; and a host of friends and relatives.
She was preceded in death by her mother, and her aunt and uncle, Betty and Lee Thomas.
Susan was born and raised in New York and was a graduate of the University of Buffalo in New York. She married her high school sweetheart in 1989 and later moved to Bloomington, Illinois in 1991. Susan was an Associate Professor at Illinois State University in the School of Communication where she taught for 19 years.
Susan was a founding member of Center For Hope Ministries in Bloomington, Illinois, where she served on the ministerial team. She also served as a board member of Habitat for Humanity, an active member of the Black Belt Speaker family and Elogeme Adolphi Christian Sorority.
Susan was a loving wife, mother, and friend. She will be greatly missed.


To send flowers to the family or plant a tree in memory of Susan M. Gibson, please visit our floral store.

To send flowers to the family in memory of Susan Gibson, please visit our flower store.