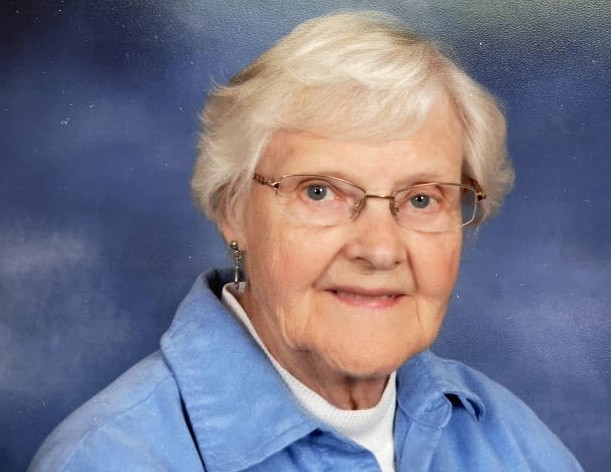 Wilma Louise Regier Dyck, 91 years of age of 711 S. Cottage Ave. #123, IL, died on December 21, 2021. Her body was donated to the Illinois Anatomical Gift Association from where her ashes will be returned to the family for burial at the Mennonite (Ropp) Cemetery. Memorials may be given to Mennonite Central Committee (MCC) or Anabaptist Mennonite Biblical Seminary (AMBS).

After eight years of schooling in Hamburg school, she took correspondence courses at the Tiefengrund School. Her high school education was continued at Rosthern Junior College. She was baptized at the Rosthern Mennonite Church. After a year at the Normal School in Saskatoon she taught at a rural school east of Laird for two years where she lived in a teacherage on the school yard being responsible for the janitor’s work, which meant stoking the coal furnace through the long winter days.

In 1952 Wilma married Cornelius J. Dyck (CJ) with whom she moved to a parsonage in Elbing, KS where CJ served the Zion Mennonite Church, while both attended Bethel College, North Newton, KS the first year. She then taught in a rural school west of Elbing for two years. Wilma graduated from Bethel College in 1955.

In the fall of 1955, they moved to Chicago where they served as hosts to the students in the Main House at Mennonite Biblical Seminary while CJ pursued doctoral studies at the University of Chicago. Mary and Jennifer were born in Chicago. In June 1959, they moved to Elkhart, Indiana where Wilma taught half days until Suzanne was born. Wilma spent two summers at Indiana University in Bloomington, Indiana, to receive her Master’s degree. She taught full time at Roosevelt and Beardsley Schools in Elkhart, IN, until she retired in 1990. During this time CJ taught at Anabaptist Mennonite Bible Seminary.

Wilma enjoyed the summer months gardening, freezing, and canning vegetables as well as sewing clothes for her daughters. Of great joy was the annual trip the family took to Saskatchewan to visit her and CJ’s families often extending the trip to see national parks and tourist spots of interest. Around the supper table the family shared their daily experiences where Wilma frequently shared hilarious and sometimes sad experiences she had with the children in the classroom. She also coached her daughters in their piano and string instruments. She attributed her love for classical music to her sister Paula who was her first piano teacher. When living in Elkhart she was involved teaching Sunday School classes, singing in the choir and the worship committee at the Hively Mennonite Church where she was a member. Wilma and CJ hosted many AMBS students and families in their home where Wilma was known for her hospitality.

In 2004 Wilma and CJ moved to Normal, Illinois to help care for their granddaughter, who was adopted by their daughter. This proved to be a helpful move to all because as her parents aged Mary was helpful in caring for them.

To send flowers to the family or plant a tree in memory of Wilma Louise Dyck, please visit our floral store.

To send flowers to the family in memory of Wilma Dyck, please visit our flower store.