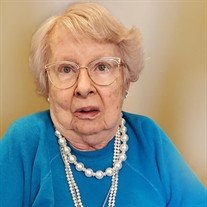 Her funeral service will be at 11:00 a.m. on Tuesday, October 20, 2020 at Kibler-Brady-Ruestman Memorial Home in Bloomington. It is advised that all those who attend the service wear a mask and practice social distancing.

Joyce was a 1948 graduate of Normal Community High School and went on to study education at Normal Illinois College for Teachers. While her kids were young and at home, she was a stay-at-home mom. After her youngest started kindergarten, she began teaching Home Economics at Mclean High School (now, Olympia High School).

She enjoyed sewing, knitting, and her Christian faith was very important to her. She will be greatly missed by all those who knew her.

Online condolences and memories of Joyce may be left for her family at kiblerbradyruestman.com.


To send flowers to the family or plant a tree in memory of A. Joyce Ferree, please visit our floral store.

To send flowers to the family in memory of A. Ferree, please visit our flower store.
Send a Sympathy Card