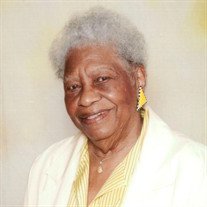 Bloomington - Addie Mae (Lewis) Brown-Johnson, 92, of Bloomington, was called home at 4:25 a.m. on Friday, October 9, 2020 in Normal.
Due to COVID restrictions, a private family service will be held at Union Missionary Baptist Church. Kibler-Brady-Ruestman Memorial Home in Bloomington is assisting the family with arrangements.
Entombment will be in Evergreen Mausoleum in Bloomington. Memorials in Addie's name may be made to Union Missionary Baptist Church in Bloomington.
Addie was born on May 4, 1928 in Birmingham, Alabama to the union of Ernest and Eva (Carter) Lewis. She married Percy Brown and to this union were born five children: Percy Jr., Gloria Jean, Willie, Pearlene, and Cheryl. After Addie was widowed at an early age, she relocated to Bloomington. She joined Union Missionary Baptist Church and was a loyal member for over fifty years. She served on the Usher Board for thirty-five years, and was also a member of the Lilies of the Valley.
Education was very important to Addie because she was forced to end her formal education early. She was employed as a Domestic Worker for many years before earning her GED and joining the workforce at Country Companies Insurance. She retired after 24 ½ years.
She then met and later married Thelmon Johnson and to this union, one child was born, Aaron "Scottie" Scott.
Addie leaves behind to celebrate and cherish her memory, her children, Willie (Carla Barnes) Brown, Pearlene (John) Redd-Pitchford, Cheryl (Curtis) Henry, and Aaron "Scottie" Johnson; many grandchildren, great-grandchildren, and extended family to whom she continues to serve as an exemplary role model.
She was preceded in death by her grandparents; her parents; all of her siblings, Queenie, Eva, Ruth, and Freddie; two husbands, Percy and Thelmon; one son, Percy, Jr.; daughter, Gloria Jean; granddaughter, Micole Brown; grandson, Caymon Redd; and daughter-in-law, Gloria Brown.
Addie was an extraordinary woman who persevered. She fought the good fight, finished the race, and remained faithful.

To send flowers to the family or plant a tree in memory of Addie Mae Brown-Johnson, please visit our floral store.

Please click here to view the video tribute
To send flowers to the family in memory of Addie Brown-Johnson, please visit our flower store.
Send a Sympathy Card