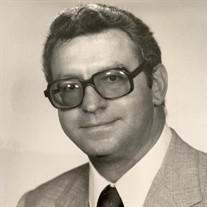 Services for Tony will be at a later date. Kibler-Brady-Ruestman Memorial Home in Bloomington is assisting the family with arrangements.

He was preceded in death by his parents and one sister.

Tony began his career by running a punch card computer system for First Federal Savings and Loan in Chicago. That led to director of computer operations for Playboy Enterprises and eventually retiring as Vice President of Personnel and Computer Operations for Encyclopedia Brittanica.

Tony was an avid fisherman and hunter. He often spent summers fishing in Wisconsin with his family.

The family would like to thank all of the nurses, physicians and support staff who helped with Tony's care both at Martin Healthcare and Advocate.

To send flowers to the family or plant a tree in memory of Anthony "Tony" J. Migas, please visit our floral store.

To send flowers to the family in memory of Anthony Migas, please visit our flower store.
Send a Sympathy Card