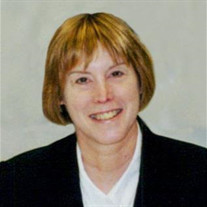 Macomb - Arlene Sue Harhen, 64, of Bloomington, formerly of Macomb died peacefully at 8:40 p.m. on Wednesday, April 26, 2017 at Bickford House Independent and Assisted Living in Bloomington with her family and two cats by her side.

There will be no services. Cremation rites have been accorded. Kibler-Brady-Ruestman Memorial Home in Bloomington is assisting the family with arrangements.

Memorials may be made to Loaves & Fishes ETC of Macomb or Friends of the Macomb Public Library or Humane Society of McDonough County.

Arlene was born on September 24, 1952 in Chicago, a daughter of James and Ann Harhen.

Surviving are her two sisters, Joyce (Roger) Eads of Normal and Nancy Harhen of Chicago and several cousins.

She was preceded in death by her parents and a sister, Susan Cole.

Arlene was raised in Chicago and graduated from Kennedy High School in 1970. She earned a degree in Literature from Western Illinois University in 1974.

On January 2, 1977, Arlene began her banking career at Citizen's Bank in Macomb. She continued working there in various positions until her recent illness.

Arlene was proud of her community and did volunteer work for local charitable organizations. She also had enjoyed bicycle riding, running and hiking in the countryside around Macomb.

To send flowers to the family or plant a tree in memory of Arlene Harhen, please visit our floral store.

To send flowers to the family in memory of Arlene Harhen, please visit our flower store.