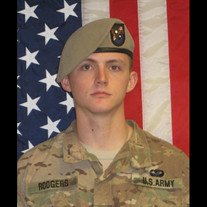 Bloomington - Army Ranger Sgt. Joshua P. Rodgers, 22, of Bloomington was killed in action on April 27, 2017 in Nangarhar Province during a joint operation with Afghan forces. Josh was assigned to Company C, 3rd Battalion, 75th Ranger Regiment, and stationed at Fort Benning, Georgia. He was on his third deployment to Afghanistan.

His Celebration Of Life will be at 1:00 p.m. on Saturday, May 6, 2017 at Eastview Christian Church in Normal with Pastor Mike Baker officiating. Visitation will be from 9:00 a.m.- 1:00 p.m. prior to the service at the church. Kibler-Brady Ruestman Memorial Home in Bloomington is assisting the family with arrangements.

A private family interment will be held. In lieu of flowers, memorials may be made to the Josh Rodgers Scholarship Fund c/o Normal Community High School.

Josh was born on August 22, 1994 in Bloomington Illinois, a son to Kevin and Vonda Coulter Rodgers.

He was preceded in death by his grandfather, Mike Rodgers.

Though we mourn, we must remember the good times and cherish them forever. Josh loved his country, his family and friends, the military and especially, his fellow Rangers and Regiment. Josh knew his purpose in life and was living out his dream. He was an amazing friend with a big heart. Josh had a smile that could light up any room and a very contagious laugh that was loved by all. He was a man of very few words, but when he spoke you listened. Through hard work and determination he continually led by example and made everyone around him proud. His generosity was unwavering and if you needed anything from him he was always there. We encourage all of those who once knew Josh to not make this a final goodbye, rather a see you later. As Josh told his grandma before he left, "If I don't come home, I will be with Jesus." Although Josh may physically be gone, his presence on earth will forever remain near. His soft-spoken words will continue to be our daily motivation. Josh was, and forever will be, a warrior. Tenacious, humble, determined, and supportive. He was a true inspiration to everyone who knew him.

Our service men and women are drawn to join for a multitude of reasons but underlying the search for adventure, the desire to see the world, the need for a "steady" job, is generally a rich vein of patriotism and a healthy dose of desire to serve and protect. Although rarely acknowledged, each one knows that a military life also means separation, hardship, often times living in adverse conditions, and the unspoken exposure to danger. Though it is rarely brought out into the light, this knowledge is tucked away and balanced by the pride in serving our country, affinity to their chosen military branch, and loyalty to their brothers and sisters in arms. For those like Josh who died in service, we do not believe that their lives were "Lost", as that minimizes the sacrifice. "Lost" implies a helpless, directionless, wandering. Josh and every other person who honorably serves in our military knows and accepts that risk, but does it anyway. They are smart, strong, talented and focused; filled with honor and pride.


To send flowers to the family or plant a tree in memory of Army Ranger Sgt. Joshua P. Rodgers, please visit our floral store.

Please click here to view the video tribute
To send flowers to the family in memory of Army Rodgers, please visit our flower store.