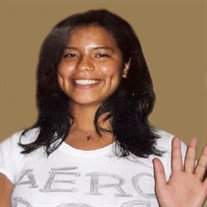 Her Mass of Christian Burial will be at 11:00 a.m. on Monday, January 13, 2020 at St. Mary's Catholic Church in Bloomington with Father John Pham officiating. A visitation will be held one hour prior until the time of mass at the church. Kibler-Brady-Ruestman Memorial Home in Bloomington is assisting the family with arrangements.

Interment will be at Evergreen Memorial Cemetery in Bloomington. Memorials may be left to the family.

Ashley was born in McAllen, Texas on November 20, 1993, a daughter to Cynthia Hernandez and David Watts.

Ashley was preceded in death by her maternal grandparents, Jose Hernandez and Blanca Noyola.

She was a loving, caring daughter and sister to all of her siblings, they were her life. Ashley was very supportive and proud of all their accomplishments and she valued them completely. She enjoyed spending time with her family and watching movies such as James and the Giant Peach.

Ashley adored her dog Pedro. She always looked forward to the Fourth of July and watching her favorite firework The Willow. She was very outgoing and did not know a stranger. If you were her friend, you had a friend for life. Ashley had the most beautiful, contagious smile with unforgettable dimples.

She felt most at home in McAllen, Texas where she was born. She was a beautiful soul who will be deeply missed and never forgotten.


To send flowers to the family or plant a tree in memory of Ashley N. Watts, please visit our floral store.

To send flowers to the family in memory of Ashley Watts, please visit our flower store.