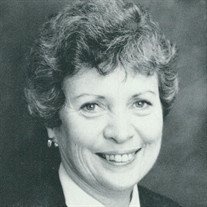 Her Memorial Service will be at 1:00 p.m. on Friday, September 2, 2016 at Kibler-Brady-Ruestman Memorial Home in Bloomington with Rev. Jim Warren officiating. A Celebration of Life immediately following at the Doubletree Hotel and Conference Center in Bloomington. In keeping with her wishes, there will be no visitation. Cremation rites have been accorded. An inurnment will be at a later date. Kibler-Brady-Ruestman Memorial Home in Bloomington is assisting the family with arrangements.

Barbara was born on May 27, 1936 in Chardon, Ohio, a daughter to Burdell and Thora Barber Bican. She married Tyler Whitmer on December 27, 1958 in Chardon, Ohio. He survives.

Barbara graduated from Chardon High School during which time she was crowned Geauga County 4-H Queen. She graduated from Miami University in Oxford, OH in 1958 where she was a member of Sigma Kappa.

She taught school in Shaker Heights, OH and then in Dixon, MO while Ty was serving in the U.S. Army at Fort Leonard Wood. Upon returning to Bloomington, she worked at Illinois State University in the admission office. Barbara sold real estate for Hal Rist, Armstrong and Snyder Realty. Several years later she was a secretary at Bloomington High School while her children were in high school. Barbara was Executive Director of the Brokaw Foundation and later became Director of Volunteers at Brokaw Hospital until she retired. She also served as President of the B-N Junior Women's Club.

Barbara and Tyler moved to Hot Springs, AR for nine years before returning to Bloomington.

She was an avid quilter, loved to golf and be with her friends. Barbara was deeply loved and will be truly missed.

The family would like to extend a special thank you to the caregivers of Sugar Creek and Meadows Mennonite for the care of Barbara.

Online condolences and memories of Barbara may be left for the family at kiblerbradyruestman.com.


To send flowers to the family or plant a tree in memory of Barbara B. Whitmer, please visit our floral store.

To send flowers to the family in memory of Barbara Whitmer, please visit our flower store.