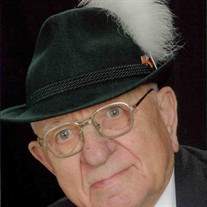 His memorial service will be at 11:00 a.m. on Monday, May 23, 2016 at Our Saviour Lutheran Church in Normal with Pastor Jeffrey R. Henricks officiating. There will be no visitation. Cremation rites have been accorded. Kibler-Brady-Ruestman Memorial Home in Bloomington is assisting the family with arrangements.

Memorials may be made to Our Saviour Lutheran Church Building Fund or the Organ Fund.

Burchard was born on February 12, 1928 in Norden, Germany, a son of Otto and Margarethe Steffens Köster. He married Gretchen Luebbers on November 22, 1953. She preceded him in death on April 29, 1981. He married Sandra L. Eich on July 29, 1982. She survives. Also surviving are three daughters, Heidi G. Allen, Linda A. Koester and Jacquelyn L. Cooper; two grandchildren, and one sister in Germany. He was preceded in death by his parents.

Butch came to the United States in 1951. He farmed until 1970 in Sterling, Illinois. Then he worked for Farm & Fleet for seven years and was an assistant manager at the Bloomington store. He also worked for McGhee Implement Co. as Parts Manager and at Millers True Value until they went out of business. After retiring, he worked part time at Super Wash located at West College Avenue and returned to Farm & Fleet in Bloomington part time until retirement at 75 years of age.

He was educated in Germany where he also served in the Army during the end of WWII and later, two years in the United States Army. He was a faithful member of the St. Paul Evangelical Lutheran Church in Sterling, Illinois where he served several times as Council Member and was past President of his then local Lutheran Brotherhood Chapter. He is now a Member of Our Saviour Lutheran Church in Normal, Illinois.

Butch loved to travel, especially to Germany and Hawaii and enjoyed several cruises. He will be greatly missed by family and friends.

Online condolences and memories of Butch may be left for the family at kiblerbradyruestman.com.


To send flowers to the family or plant a tree in memory of Burchard "Butch" F. O. Koester, please visit our floral store.

To send flowers to the family in memory of Burchard Koester, please visit our flower store.