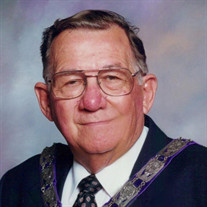 Memorials may be made to the Shriners Children's Hospital of Chicago or First Presbyterian Church in Normal.

Wally was born on July 29, 1930 in Bloomington, a son to Nellie Tipping Crouch and Claremont Crouch. He married Mabel Allen on October 15, 1949 at First Presbyterian Church in Normal. She preceded him in death on September 18, 2017.

He was preceded in death by his parents, brother, Royce Crouch, and sister, Claire Bryant, son-in-law, Clayton Ayers, and half-brother, Larry Hummer.

Wally was employed at the Normal Theater and Felmely Dickerson Company, retiring in 1996. He loved all and helped so many.

Wally was a past Master for the Grand Lodge of Illinois. He was a member of the Lodge for 64 years. His service in the Valley of Bloomington Scottish Rite, including past Thrice Potent Master of the Bloomington Lodge of Perfection. He received his 33º of Masonry in Cincinnati, Ohio in 1986. The Illinois Council of Deliberation awarded Wally the Distinguished service award.

He also was a member of the Scottish Rite Camping Club. He received the Knight York Cross of Honor and in 2007 the Knight of Ish Sodi in the Bloomington York Rite Bodies Court. Wally's service in the Mohammed Shriners included Captain of the Tin Lizzie Patrol in 2010, Bloomington Shrine Club President in 1980, past Potentate in 1994, and he was a charter member of the Shriner All-Star Football Game, where he was game Chairman from 1980-1981.

He was in the Peoria Court 40, Royal Order of Jesters, and demitted in 2019. As a member of the Central Illinois York Rite College #42, he received the Order of the Purple Cross in 1991. He served as a charter member of the Earl of Terrell Knight of Masons, and in the Red Cross of Constantine. There he received the Edwards Conclave, St. Helena Conclave, and The Saxa Rubra Conclave.

Other degrees Wally received include the Allied Masonic Degrees from The Shadrach Bon Council $272 and the Lily of the Valley XLVI from the Holy Royal Arch Knight Templar Priests. He was a recipient of the Order of the Eastern Star Felicity Chapter #387.

Wally provided dedicated service for the American Passion Play for 39 years, where he served as a trustee, door staff, president of the board of trustees from 1998-2014, and business manager from 2002-2017.

Wally will be deeply missed by all who knew him. His friends and family remember him with love, respect, and admiration. As Wally would say: "Love and so long."

To send flowers to the family or plant a tree in memory of C. Walden "Wally" Crouch, please visit our floral store.

To send flowers to the family in memory of C. Crouch, please visit our flower store.
Send a Sympathy Card