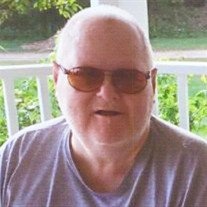 His Memorial Mass will be at 10:00 a.m. on Tuesday, August 8, 2017 at St. Mary's Catholic Church in Bloomington with Fr. Joseph Baker officiating. Kibler-Brady-Ruestman Memorial Home in Bloomington is assisting the family with arrangements.

Inurnment will be in Evergreen Memorial Cemetery in Bloomington. Full Military Rites will be accorded by the Bloomington-Normal American Legion Honor Guard. In lieu of flowers, memorials may be made to the family.

He was preceded in death by his parents and two brothers.

Calvin retired as a career soldier of the North Dakota Army National Guard and the United States Army Reserve. He retired after 33 years of employment at Trinity Health in North Dakota.

He was a member of St. Mary's Catholic Church and American Legion Post # 56.

Calvin was a loving husband, father, grandfather and great grandfather who will be greatly missed.


To send flowers to the family or plant a tree in memory of Calvin R. McFarlen, please visit our floral store.

Please click here to view the video tribute
To send flowers to the family in memory of Calvin McFarlen, please visit our flower store.