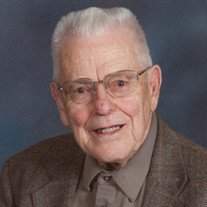 Bloomington - Carl L. Nierstheimer, 97, a life-long resident of Bloomington, passed away on March 29, 2016 at Heritage Health Care in Bloomington.
His funeral will be at 11:00 a.m. on Monday, April 4, 2016 at Trinity Lutheran Church, 801 S. Madison St., Bloomington, Illinois with Pastor Terry Strom officiating. Visitation will be from 9-11:00 a.m. prior to the service at the church. Kibler-Brady-Ruestman Memorial Home in Bloomington is assisting the family with arrangements.
Entombment will be at Park Hill Cemetery with Full Military Rites accorded by the Bloomington-Normal American Legion Honor Guard. In lieu of flowers, memorials may be made to the ISU Foundation for the Nierstheimer-Giese- Gurtner Scholarship Fund # 5496103 at Illinois State University, 1101 N. Main St., Campus Box 8000, Normal, Il. 61790-8000.
Carl was born on October 15, 1918, a son of Frank and Hilda Giese Nierstheimer. He married Mary Gurtner on October 20, 1943 in San Diego while in the Navy. They treasured their 58 years together before Mary went to heaven in 2002.
Surviving are three proud and grateful sons, Dave (Betty) of Bloomington; Norm (Sally) of W. Lafayette, IN; and Ray (Sue) of Gurnee, IL: eight grandchildren, Scott (Edith) of Estero, FL; Jeff (Shawn) of Mahomet, IL; Gail (Tony) Brown of Glasford, IL; Eric (Stephanie) of Bellville, TX; Laura of Indianapolis, IN; Jenni (Michael) Jaroscak of Grayslake, IL; Jon (Melissa) of Forest Park, IL; and Joe (Katie) of Pleasant Prairie, WI; and eleven great-grandchildren, Alexandra, Ashley, Justin, Jeremy, Alexis, Ashley, Mattie, Charlie, Teller, Peyton and Mason; former daughter-in-law Donna Reardon; four step grandchildren and ten step great-grandchildren.
Preceding Carl in death were brother, Edward, (1930) and daughter-in-law, Susan (Hodges) Nierstheimer, (2005).
Carl was a 1941 graduate of Illinois Wesleyan University and a member of the Sigma Chi fraternity. He served in Guam during WWII and Admiral Nimitz personally presented Carl with a signed picture and a letter of gratitude for his service. He partnered with his father to run the Nierstheimer Grocery store, then worked at the Daily Pantagraph and retired in 1990 after 30 years in the Advertising Department at State Farm.
He was a very generous volunteer leader. Carl was with the American Legion Junior Baseball Program for nearly 50 years - 32 years as Chairman. The program became one of the nation's best and during his Chairmanship over 25,000 boys and girls participated. Carl and hundreds of volunteers built the first-class baseball field at O'Neil Park in Bloomington. The field was named the Carl Nierstheimer Field in 1999 to recognize his devotion and hard work.
The Chicago Cubs honored Carl by inviting him to throw the honorary first pitch at a Cubs - Cardinal game in 1998.
He served Trinity Lutheran Church and School for decades in leadership roles including Board of Elders, Christian Education, Witness and many more.
Carl was on the board of the Bloomington/Normal Housing Authority for 19 years as they helped to develop low income housing. He was a 71-year member of the American Legion Post 56. Carl was a past President of the local Jr. Chamber of Commerce, State Vice-President and Man of the Year in 1953. After retirement, Carl volunteered 1,600 hours at BroMenn Hospital.
Our thanks to his many friends, co-workers, co-volunteers, care givers and residents of Luther Oaks and the Heritage Health Care center for enriching Carl's life. He will be missed but his love and legacy continue.
You may share your thoughts and memories of Carl and his family at www.kiblerbradyruestman.com.


To send flowers to the family or plant a tree in memory of Carl L. Nierstheimer, please visit our floral store.

To send flowers to the family in memory of Carl Nierstheimer, please visit our flower store.