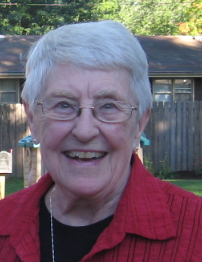 Her funeral service will be held at 11:00 a.m. on Thursday, May 26, 2022, at Kibler Brady Ruestman Memorial Home in Bloomington. Visitation will be held one hour prior to the service at the memorial home. Interment will follow at Park Hill Cemetery in Bloomington.

She was preceded in death by her parents; sister, Jane Ann (Walter) Kern; and grandson, Clifton Aldridge.

Carol graduated from Bloomington High School in 1950, where she was a cheerleader, a class officer and met her future husband, Jack. She received a Bachelor’s Degree in Geography from Illinois State Normal University in 1955, where she was a member of the Gramma Theta Upsilon, the international geography honor society. For several years, she was employed as a substitute teacher in District 87, the clerk at Normal Public Library, and following her retirement she worked at the Campaign Office for Bill Brady.

Carol loved to be involved in the community feeling it was her duty to give back. Over the years, she was a past president of Delphi International. She volunteered with the Brokaw Hospital Service League. Carol was a long time cast member in The American Passion Play, playing the part of Martha, beginning in 1961.  She was also in the Christmas Carol at the Consistory for years for several seasons along with the rest of the Aldridge family.  She was involved with Community Players Theatre, where she served as producer, costume chairman, box office chairman, and member of the board of directors. She was a member of the Dinky Dozen Motorcycle Club, where she was past president and rally chairman. Carol was on the McLean County Republican Central Committee, where she served as vice chairman and secretary. She was the past president of the Republican Women’s Club. She was a Volunteer manager of Republican Headquarters and she volunteered with RSVP.  She was the alternate delegate to the Republican National Convention in 2000.

Carol was a master at needlepoint and knitting.  She loved riding her R75/5 BMW motorcycle all over the country, enjoyed family downhill skiing trips, was an avid traveler loving to experience new places, loved theatre and swimming in her pool, and was a voracious reader of all genres. What she enjoyed and loved was her family and she cherished the time spent with them all, especially her grandchildren and great-grandchildren. Carol a wonderful wife, parent, grandparent, great-grandmother, and friend. She was dearly loved and will be greatly missed.

To send flowers to the family or plant a tree in memory of Carol Cunning Aldridge, please visit our floral store.

To send flowers to the family in memory of Carol Aldridge, please visit our flower store.