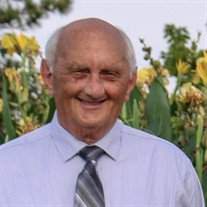 Carroll Ray "Hondo" Bradshaw, 79, of Bloomington, formerly of Kickapoo, passed away peacefully at 8:36 a.m. on Wednesday, February 7, 2018 at his residence.
Cremation rites have been accorded. Kibler-Brady-Ruestman Memorial Home in Bloomington is assisting the family with arrangements. A future date for a celebration of life will be announced.
Memorials may be made to the Illinois Neurological Institute in Peoria with deep gratitude for all they did to assist in Hondo's care.
Hondo was born January 5, 1939 in Kinderhook, Illinois, the middle son to Dallas and Leona Houseweart Bradshaw. He was the beloved brother of both his older sister, and younger brother. He married Laura Shumate on April 20, 1974 in Peoria, and they merged their families before adding a fifth daughter of their own. Laura survives.
Also surviving are his daughters, Tonya (Stephen) Keach-Moist, Debra Bradshaw-Burch, Anne Bradshaw, Delores Jones, and Cynthia (Jay) Perdun; one brother, Michael (Sharon) Bradshaw; and 7 grandchildren.
He was preceded in death by his parents and one sister, Marge Browning.
Hondo was a small town boy with a great big heart. One of the most likeable people you ever could meet, he always had a twinkle in his eye, and laughed freely. And being a bit of a trickster, very often it was his sense of humor (and slightly mischievous nature) that got people laughing.
Hondo worked his entire career at Caterpillar. Beginning his career right after the army, he would often wear his fatigues to work. It was there that he was given the nickname Hondo based on a John Wayne movie. And even though that movie was a western and not an army film, the name stuck. And Carroll Ray became Hondo, the one-name wonder!
He was the patriarch of the matriarchy; raising, and raising up, all of the women in his family. He was perfectly happy to schlep everyone's shopping bags on vacation, and was always smiling when he slipped a few bills to someone for spending money. He was generous with his compliments and praise, and was as proud of his children and grandchildren's accomplishments as he was his own. And while he'd always give his opinion, more often than not, he would simply say: "Whatever makes Mama (Laura) happy".
He deeply loved his family, each person in their own way, and he always included everyone. Whether it was a trip to the dump in the pickup, pulling kids around in the trailer while he did chores, or patiently getting his hair done, and even makeup applied by little hands, he loved it all. And if something happened to go wrong, as his granddaughter always said, "Papa can fix it. Papa can fix anything".
Hondo was a man who could philosophize with the best of them, or tip back a margarita without a care in the world. He was a man who loved the mountains, and who started getting excited for Christmas right around Halloween. He was a man who gave great hugs (and stellar advice), and showed his people how much he loved them, unconditionally. He was kind, gentle, and strong. Everything anyone could ever want in a person.
Everyone loved Hondo, and everyone has at least one story to tell about him. (His family would love to hear yours!) Hondo will be greatly missed by all, but comfort comes from knowing that through our memories, his legacy lives on.

To send flowers to the family or plant a tree in memory of Carroll "Hondo" Bradshaw, please visit our floral store.

To send flowers to the family in memory of Carroll Bradshaw, please visit our flower store.