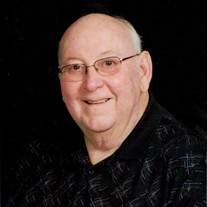 Charles L. "Chuck" Harris, 81, of Bloomington, passed away at 2:55 a.m. on Tuesday, May 14, 2019 at Heritage Health in Normal.
His Funeral Mass will be at 10:00 a.m. on Saturday, May 18, 2019 at St. Mary's Catholic Church in Bloomington with Monsignor Doug Hennessy officiating. Visitation will be from 4:00-7:00 p.m. on Friday at Kibler-Brady-Ruestman Memorial Home in Bloomington.
Burial will be in Park Hill Cemetery in Bloomington. Memorials may be directed to St. Mary's Catholic Church or St. Mary's Catholic School, both in Bloomington.
Chuck was born on May 2, 1938 in Bloomington, a son to George and Lena Caruso Harris. He married Doris J. Roseman on September 7, 1963 in Bloomington.
Surviving is his loving wife of 55 years, Doris Harris; son, Geoffrey Harris; daughter, Kelly Harris; granddaughter, Madison Harris; grandson, Logan Hibler; sister, Toni Whorrall, all of Bloomington and several nieces and nephews.
He was preceded in death by his parents; brother, Don; sister, Betty; and an infant brother, Stephen.
Chuck was born and raised in Bloomington, attending Catholic schools. He proudly served in the Illinois National Guard. Chuck began working for the Gulf, Mobile and Ohio Railroad and later joined the Bloomington Fire Department where he served for 28 years, retiring in 1993.
Over his life, he was involved in numerous projects, including coaching grade school basketball, working on various events at St. Mary's Church in Bloomington. Through his years as a Bloomington Fireman, he was involved in many charities, including the Holiday Food Basket Drive and the annual Fireman's Memorial Flag's Decorating Graves.
He was an avid Chicago Cubs fan and loved to play the slot machines.
Special thank you to his brotherhood of Bloomington firefighters for their friendship and support and Dr. Kindred and his nurse, Crystal for their special care.
Chuck will truly be missed by all who knew and loved him.


To send flowers to the family or plant a tree in memory of Charles L. "Chuck" Harris, please visit our floral store.

Please click here to view the video tribute
To send flowers to the family in memory of Charles Harris, please visit our flower store.