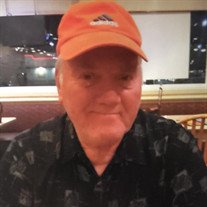 Charles Paul "Charlie" Hoback, 77, of Bloomington, passed away on April 27 at St. Joseph Hospital, Bloomington, after a long battle with chronic health conditions.

Interment will be in a family plot in Woodlawn Cemetery, Clinton IL. Given the current crisis, there will be no immediate burial ceremony. There will be a larger celebration of his life later this year for friends and family, when travel restrictions are lifted, and everyone is able to gather in his memory. Kibler-Brady-Ruestman Memorial Home is assisting the family with arrangements.

Charlie was born March 2, 1943 in Lerna, to John and Pauline Hoback. He grew up mainly in the Mattoon-Charleston area. Surviving siblings include the two ‘babies' of the family, brother Kenneth, Troy, and sister Marie, Mattoon. Sisters, Phyllis, Marilyn, Lois and Ima Jean, and brothers, William and John preceded him in death.

Following high school, Charlie joined the Navy in 1960, proudly serving his country throughout the South Pacific as a radar operator and ship's photographer on the USS Ashtabula. Following his military service, he settled in Bloomington-Normal, IL. He joined the IBEW union as an electrician, working many important jobs over several decades. In 1966, he married Linda Buttry (Roberts). Together they had two sons, Todd, Las Vegas, and Chris, Saigon, Vietnam. He was also blessed with a granddaughter, Sarah, Los Angeles. He later married Cheryl Stahly, and they enjoyed visiting Las Vegas.

For many years, Charlie was active with VFW Post 454 in Bloomington, including serving as Treasurer and Commander, although his favorite position at the VFW was on the dance floor. He was also a member of the Bloomington Masonic Lodge 43 and Valley Of Bloomington Scottish Rite. Charlie retired as an electrician from Illinois State University in 2002. For the last several years, he enjoyed spending time with Janet Mears. Janet took great care of him through many health challenges. She always had his best interests at heart, and he loved and appreciated her very much.

Among his hobbies, he enjoyed restoring classic vehicles, including 1937 and 1957 Chevrolet sedans and a 1939 Chevy pickup truck. He was a true handy-man, as he could build or fix just about anything; not to mention break a few things. During his retirement, he also liked to play Texas Hold'em, both in Illinois poker leagues and when visiting Las Vegas several times a year. He knew how to make the most of the hand you are dealt, in poker and in life.

Above all, Charlie was a great friend to everyone he met. He would not hesitate to help anyone in need. If you needed him, he was there for you. You could not ask for a better dad, brother or friend. His memory will live on, in the hearts of those he touched.

Memorial Contributions may be directed to the Humane Society of Central Illinois.

To send flowers to the family or plant a tree in memory of Charles Paul Hoback, please visit our floral store.

To send flowers to the family in memory of Charles Hoback, please visit our flower store.
Send a Sympathy Card