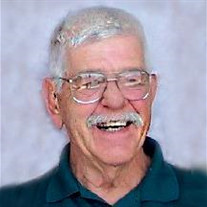 Charles George McCarthy, 86, was a huge man, but his height was dwarfed by the size of his heart. Unwaveringly loyal to family and friends, he was loved and adored. Charlie passed peacefully from this life on April 10, 2019 at Heritage Health of Normal.

He is survived by his wife, Dorothy of 62 years, daughters Erin Trnka (Curt) of Brandon, FL. and Tracy Harper (Greg) of Walhalla, ND. and son Mike McCarthy (Rita) of Morton, IL. and seven grandchildren.

Charlie attended the University of Colorado, Boulder, on a football scholarship. With the ongoing war in Korea, he left college and joined the Marines following his sophomore year where he served in the infantry from 1952 to 1955.

After discharge from the service, Charlie graduated from the Illinois State Police Academy, joining the force in November of 1955. Soon after his assignment to District 6 in Pontiac, he met Dorothy Davis. Never being one to rush into things, he asked her to marry him two weeks later. Chuck and Dode wed on September 15, 1956, built a home in Fairbury, Illinois and started a family.

During the political unrest of the 1960's Charlie received advanced instruction in riot control and mob violence, becoming a subject-matter expert. He taught at the ISP Academy in Springfield and was involved in the 1968 Chicago Democratic Convention and riots in Cairo, Illinois. His leadership skills and riot control knowledge and experience served him well later in his career as Incident Commander quelling the 1978 Pontiac prison riot.

Relocating his family to Bloomington in 1971, Charlie used his veteran's benefits and received a Bachelor's of Science in Sociology from Illinois Wesleyan University in 1973. Promoted to lieutenant in November 1975, he was assigned to ISP District 15 in Oak Brook, IL. Promoted to Captain in 1977, Charlie took command of District 15 where he was responsible for the Illinois Toll Road near Chicago. Charlie completed his career serving as District 6, Pontiac. Commander and retired in December 1987 with 35 years of service.

Following retirement, he and Dode built a home in the shadow of the Collegiate Peaks near Nathrop, Colorado where they spent their summers until 2012.

A public Celebration of Life will be held Monday, April 15, from 5:00 - 8:00 p.m. at Lakeside Country Club in Bloomington. Kibler-Brady-Ruestman Memorial Home in Bloomington is assisting the family with arrangements.

In lieu of flowers, Charlie would have appreciated any donation to the Illinois State Police Heritage Foundation http://www.isphf.org/donations/ or the Semper Fi Fund for Wounded Marines https://semperfifund.org/


To send flowers to the family or plant a tree in memory of Charles G. "Charlie" McCarthy, please visit our floral store.

To send flowers to the family in memory of Charles McCarthy, please visit our flower store.
Send a Sympathy Card