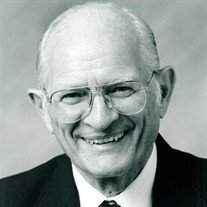 Bloomington - Charles "Chuck" L. Rhykerd, Sr., Ph.D., 89, of Bloomington passed away at 2:59 a.m. on Thursday, October 11, 2018 at OSF HealthCare St. Joseph Medical Center in Bloomington.
His funeral service will be held at 11:00 a.m. on Saturday, October 20, 2018 at Calvary United Methodist Church in Normal with Rev. Ray Owens and Rev. Mark Wolford officiating. Visitation will be from 9:00 a.m. till the time of the service at the church. Kibler-Brady-Ruestman Memorial Home in Bloomington is assisting the family with arrangements.
Interment will be at Park Hill Cemetery in Bloomington. Memorials may be made to the Charles Rhykerd Scholarship Fund at Purdue University, the Illinois State University Agriculture or Chemistry Department, or a charity of the donor's choice.
Chuck was born on April 7, 1929, in Cameron, IL, a son to James A. and Blanche Olson Rhykerd. He married Eileen McIlrath on June 19, 1954 in Woodson, IL.
He is survived by his wife, Eileen Rhykerd of Bloomington; his children, Charles L. (Kristina) Rhykerd, Jr. of Albuquerque, NM, Robert L. (Kimberly) Rhykerd of Carlock, and Linda M. (Greg) Ferrence of Normal; and six grandchildren.
Chuck was preceded in death by his parents and two sisters, Nola McEntire and Ann Asplund.
He was educated at University of Illinois, Ohio State University, and Purdue University where he received his Ph.D. Chuck taught in the USDA Pasture Lab at State College in Pennsylvania, and then later at Purdue University where he was a part of international, agricultural research.
In 1985, Chuck received the "Best of the Best of the Agriculture Professors in USA and Canada" Award by the North American Colleges and Teachers of Agriculture. He was inducted into the "Legends of Agronomy" in 2012 at Purdue University.
Chuck was a member of American Society of Agronomy, National Rifle Association, National Skeet Shooting Association, Amateur Trapshooting Association, and American Motorcycle Association.


To send flowers to the family or plant a tree in memory of Charles 'Chuck' L. Rhykerd, please visit our floral store.

Please click here to view the video tribute
To send flowers to the family in memory of Charles Rhykerd, please visit our flower store.