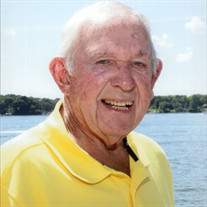 His funeral service will be held at 11:00 a.m. on Saturday, November 18, 2017 at Wesley United Methodist Church in Bloomington with Pastor Vaughn Hoffman officiating. Visitation will be from 9:00 a.m. until start of service on Saturday at the church. Kibler-Brady-Ruestman Memorial Home in Bloomington is assisting the family with arrangements.

A private interment will be in East Lawn Memorial Gardens in Bloomington. Memorials may be made to Wesley United Methodist Church or a charity of the donors choice.

He was preceded in death by his parents; wife, Kathryn Smith; and daughter, Mary Jane Styczynski.

Chuck proudly served in the United States Navy during WWII aboard the USS Chewaucan. After the war, he returned to Wyalusing, PA, where he was a very successful coach and school administrator. In 1958, Chuck joined State Farm Insurance and retired after 32 years as the Regional Vice President for the Pennsylvania Region.

Upon retirement, Chuck split his time between golf courses in Rio Verde, AZ and the Crestwicke Country Club in Bloomington, IL where he joined a Tuesday group for dinner over the last 27 years.

First and foremost, Chuck loved his family, especially his grandchildren. Along with golf, Chuck loved to fish and cheer on one of the many sports teams he followed over the years. He was also a member of Masonic Union Wyalusing Lodge #108. He will be deeply missed by all his friends and family.


To send flowers to the family or plant a tree in memory of Charles F. Smith, please visit our floral store.

To send flowers to the family in memory of Charles Smith, please visit our flower store.