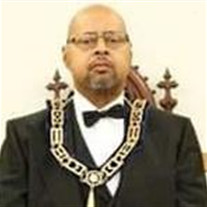 It is with great sadness that the family of Danny Lee Miller, 54, announces his passing on Wednesday, February 21, 2018 at 8:40 p.m. at OSF Saint Francis Medical Center in Peoria, Illinois.
His funeral service, with military rites, will be held at 11:00 a.m. on Thursday, March 1, 2018 at
Mt Pisgah Baptist Church in Bloomington, Illinois. Pastor Frank L. McSwain, Sr. will be officiating. Visitation and Masonic Rites will be on Wednesday, February 28, 2018 at Kilber-Brady-Ruestman Memorial Home in Bloomington and one hour prior to his service at the church on Thursday. Interment will be in Camp Butler National Cemetery in Springfield, Illinois on Friday, March 2, 2018 at 1:00 p.m. Memorials may be directed to the family.
Danny was born on September 10, 1963 in Springfield, Illinois, the son of Hillman Miller and Judith Raymond, his loving Aunt and Uncle, Marie and Curtis Donnell raised him.
His family meant the world to him and was his greatest treasure. Danny will be lovingly remembered by his wife of 27 years, Joselyn Miller and his children Monique (Ron) Poe-Smith, Atlanta, GA and Chynna Miller, Normal, IL. His pride and joy was being a grandfather to his best buddy and grandson, Maison Poe. He will be fondly remembered by Mrs. Sharon Reed, who he considered a second mother.
He will be greatly missed by his siblings, who were very special to him: Sharon (Fred) Bennett, Belleville, IL; Fongie Lanier, Atlanta, GA; Tawana Miller, and Sandi (Jimmy) Miller-Haley, both of Springfield, IL; Pastor Jerry (Florence) Miller; Ricky Miller, both of Springfield, IL; Bobby (Vicki) Raymond, Saginaw, TX; Kim Miller, Taylorville, IL; Orlando Johnson, Springfield, IL; Roy (Penny) Noble, Payton, IL; Keith (Vickie) Donnell, Rockford, IL; William McCutcheon, Dallas, TX; Charles Donnell, Peoria, Illinois; and a host of nieces, nephews, cousins and friends.
He was preceded in death by his parents, daughter Stephanie D. Miller and his Aunt and Uncle Marie and Curtis Donnell.
Danny was a veteran in the United States Army. He worked as a security guard at St Joseph Hospital in Bloomington and was proud of his security work in Evergreen Terrace in Springfield. He worked as a fork-lift driver at GATX for many years before retiring.
He was a faithful member of Mt Pisgah Baptist Church, where he was President of the Brotherhood. and a member of the Men's Choir. He was Vice President of Orthodox Woodriver District Baptist Association Brotherhood. In high school, under the leadership of Mrs. Sharon Reed, Danny participated in the choir at Bethel United Methodist Church and show and concert choirs at Woodruff High School. He was Past Master of Elijah S. Betts Lodge #23, Prince Hall Affiliated.
Danny enjoyed fishing, reading and singing. He loved volunteering by serving others. He will be greatly missed.


To send flowers to the family or plant a tree in memory of Danny Lee Miller, please visit our floral store.

Please click here to view the video tribute
To send flowers to the family in memory of Danny Miller, please visit our flower store.