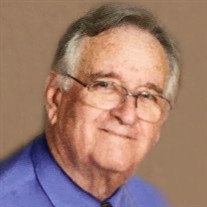 His funeral service will be at 11:00 a.m. Saturday, July 15, 2017 at Trinity Lutheran Church in Bloomington with Pastor Terry Strom officiating. Visitation will be from 9:00-11:00 a.m. prior to the service at the church. Military Rites will be accorded by the Bloomington-Normal American Legion Honor Guard. Kibler-Brady-Ruestman Memorial Home in Bloomington is assisting the family with arrangements.

Interment will be in East Lawn Memorial Gardens in Bloomington. Memorials may be made to Miller Park Zoo.

Darwin was born on September 20, 1936 in Bloomington, a son to Jacob L. and Wava M. (Scarbrough) Ropp. He married Doris Nenne on December 26, 1959 at Trinity Lutheran Church in Bloomington.

Darwin grew up in the Bloomington-Normal community. He graduated from Normal Community High School in 1954. He proudly served in the United States Army 1956-1958 assigned to Fort Richardson Alaska.

He had a long career as an engineer at G.T.E., retiring after 37 years.
Darwin loved the outdoors and spending time at Miller Park. He enjoyed boating, fishing, biking and cherished his time alone, enjoying all nature had to offer. He loved spending time with his family and friends.


To send flowers to the family or plant a tree in memory of Darwin L. Ropp, please visit our floral store.

Please click here to view the video tribute
To send flowers to the family in memory of Darwin Ropp, please visit our flower store.