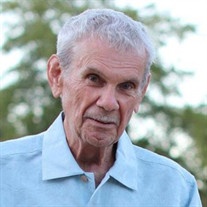 Bloomington - David Stanley Anderson of Jonesboro, Arkansas, formerly of Bloomington, passed away on Wednesday, March 18, 2020, at the age of 82. After several months of declining health, David died peacefully with his children at his side in the home.

Kibler-Brady-Ruestman Memorial Home in Bloomington is assisting the family with arrangements.

David was born September 26, 1937, in Fertile, Iowa to the late Stanley and Mildred Tenold Anderson. He grew up in Joice, Iowa on the family farm, where he cultivated a lifelong love of animals. A graduate of the University of Iowa in 1961, he worked in the Iowa City Parks and Recreation Department before moving his family to Normal, Illinois in the same position in 1965.

In 1970, David was hired by the Town of Normal to become its first City Manager, a position he held for 29 years before retiring in 1998. Among his many accomplishments in this role were the City Hall offices (now the annex) and Fire Stations. He was instrumental in the completion of the Constitution Trail, the Ironwood Golf course and Subdivision, the College Hills Mall, the redevelopment of 1 Normal Plaza and the moving of Amtrak's station from Bloomington to Normal. He was also proud to have been involved in securing the Mitsubishi automotive plant to Normal and was honored with the Ash City Park renamed Anderson Park upon his retirement.

He was an active member of St. John's Lutheran Church in Bloomington and the First United Methodist Church in Jonesboro. During his retirement, David was active with the ICMA as a Range Rider, helping other towns find city administrators. He was an active volunteer with Mended Hearts, the United Way, Safe Harbor and as an NEA Baptist Hospital "Pink Lady" volunteer.

David is preceded in death by his former wives, Sandra J. Anderson and BJ Anderson.

A celebration of life service is being planned for a later date.

To send flowers to the family or plant a tree in memory of David S. Anderson, please visit our floral store.

To send flowers to the family in memory of David Anderson, please visit our flower store.