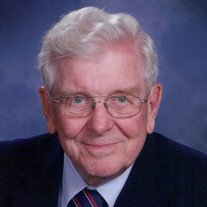 He will be buried in a private service at Park Hill Cemetery in Bloomington next to his wife Norma Jean Ashbrook, who died in 2009.

David was born at home on a small farm on the banks of the Kaskaskia River near Sullivan, Illinois, the son of Clara and Arthur Ashbrook. He reveled in his reputation among family and friends for jokes and pranks, and delighted in telling his grandchildren he walked uphill both ways to a one-room schoolhouse through blizzards so deep that only his head would show.

He met Norma at the University of Illinois and they were married the day before their graduation, where he received his diploma and his Lieutenant bars from ROTC. He served two years in the Army, stationed in Kentucky, Louisiana, North Carolina and Kansas.

Dave and Norma eventually settled on her family's farm south of Bloomington, where he lived until his death. An active community member, he served nine years as a Unit 5 School Board member, as president of the Corn Belt Council of School Boards and was a director of the Illinois Association of School Boards. He served as president of the Friends of Milner Library and president of the McLean County Historical Society. He was active in First Presbyterian Church and Habitat for Humanity and was a great enthusiast for Barn Keepers, the McLean County-based group devoted to preserving and celebrating old barns. He was Chaplain of the Illinois Chapter of the Sons of the American Revolution, ILSAR Man of the Year 2015, and loved to share family history dating back to the arrival of the Ashbrook family's first American ancestor, "Antelope John," in Philadelphia in 1682.

In a long career in commercial real estate sales, David brought many companies and jobs to Bloomington-Normal. His real pleasure was in family and community. He was a devoted father and grandfather who was always there to celebrate those he loved. He thought nothing of driving across the country for family events.

On his last active day last week, Dave had lunch at the Garden of Paradise with good friends, picked up a just-picked, perfect bag of his neighbors' sweet corn and spent the afternoon with his daughter, who was with him when he suffered a stroke.

In lieu of flowers, memorials may be directed to the McLean County Historical Society or Barn Keepers in McLean County.

He was a lively, rascally storyteller and envisioned a colorful funeral with plenty of stories. With Covid-19 disrupting those plans, the family welcomes memories and tales from Dave's life from friends in the community. Please share them for his grandkids at the Kibler-Brady-Ruestman Memorial Home website: kiblerbradyruestman.com.

To send flowers to the family or plant a tree in memory of David K. Ashbrook, please visit our floral store.

To send flowers to the family in memory of David Ashbrook, please visit our flower store.
Send a Sympathy Card