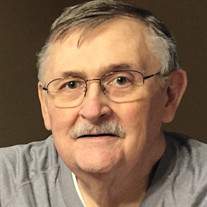 Bloomington - David Erickson, 68, passed away at 1:10 p.m. on Sunday, September 10, 2017 surrounded by family at his home in Bloomington.
His Celebration of Life will be at 12:00 p.m. on Wednesday, September 13, 2017 at Trinity Lutheran Church in Bloomington with Pastor Chuck Bahn officiating. Visitation will be from 10:00-12:00 p.m. noon prior to the service at the church. Kibler-Brady-Ruestman Memorial Home in Bloomington is assisting family with arrangements.
David was born on July 28, 1949 in Bloomington, Illinois, a son of Wesley and Caroline (Bendschneider) Erickson. He married Vicki Lynn Erickson on Oct. 11, 1969, at Trinity Lutheran Church in Bloomington. She passed away on Nov. 7, 2012.
Surviving are two daughters, Lori Erickson of Portland, OR and Jill (James) Noland of Normal; three grandchildren, Elizabeth, Hailey and Karley Noland. David is also survived by a sister, Sandra Hinthorn, of Bloomington; sister-in-law, Linda Stroh of Secor; and brother-in-law, Michael (Molly) Wieting of Bloomington; five nieces, Brooke Jones, Amy Momola, Kathryn Rexroad, Madalon Wieting and Anna Wieting; and one nephew, Chris Hinthorn.
On June 21, 2014 David married Denise (McClure) Kinzer. Denise has a son, Adam (Beth Wilson) Kinzer, of Normal and daughter Amy (Jay) Steidinger, of Forrest, IL and four grandchildren, Caleb, Lindsey, Seth, and Ryan Steidinger. He embraced Denise's family as if they were his own. He is also survived by two brothers-in-law, Marlon and Jim McClure, of Normal and a sister-in law, Michele (Royce) Cage of Kokomo, IN.
David enjoyed very much all of the friendships he'd made through the Normal Community class of 1967, his years working at Eureka Company and at Mitsubishi Motor Company. His friends say that as a tooling engineer, he could make or repair about anything, wood or metal. He worked on the railroad early in his career, and continued a life-long love of trains.
He was a member of Trinity Lutheran Church in Bloomington and the Redbird Club at Illinois State University in Normal.
Memorials in David's honor may be directed to the Barnes Jewish Hospital Siteman Cancer Center or Trinity Lutheran Church or Illinois State University Athletics.


To send flowers to the family or plant a tree in memory of David Erickson, please visit our floral store.

Please click here to view the video tribute
To send flowers to the family in memory of David Erickson, please visit our flower store.