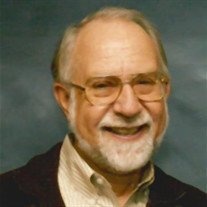 David Day Rademacher, 79, died following a brief illness on Thursday, December 27, 2018 at Advocate BroMenn Medical Center, Normal, Illinois.
A Celebration of Life will be at 2:00 p.m. on January 12, 2019 at New Covenant Community in Normal, IL. The Rev. Richard Watts and the Rev. Robert Ryder will officiate. Visitation with family will follow the service. Kibler-Brady-Ruestman Memorial Home is assisting the family with arrangements.
Memorial Services will be held at 11:00 a.m. on Saturday, January 5, 2019 at Stiehl-Dawson Funeral Home in Nokomis, IL. Visitation will be at 10:30a.m. prior to services at the funeral home, followed by committal service with military rites in the Kettlekamp Family Cemetery.
David was born March 14, 1939, the only child of Erwin J. Rademacher and Anna Margaret (Shelton) Rademacher. He married Mary Jean Hewitt on August 21, 1966. They have a daughter and a son. He married Betty Green on June 7, 1975. She survives.
He was preceded in death by both parents and his beloved uncles, E. E. and Louis Rademacher.
He is survived by his wife, Betty, of 43 years, his daughter Gieta (Glenn) Beckmann, his son, David (Jenny) Rademacher, and his daughters, Susan (Rob) Blaese and Karen (Jim) Townsend.
He was a proud, loving and fun "Papa" to grandchildren, Ezri and Cyrina Beckmann, David Charles Morris JR, and Jeremy and Ashley Townsend. Great grandchildren, Grayson, Locke, and Zeke Townsend, and Cameron Jeanne Morris will always know him as they hear "Papa stories." In addition to the love for his family and friends, David was devoted to his sweet little dog, Lizzy.
He was a graduate of Nokomis High School where he was a lettered athlete in four sports and president of his Senior class, He received bachelor and master degrees from the University of Illinois, Urbana. At the U of I, he was on University Senate, president of Senior Mens Honorary, president of Interfraternity Council, a YMCA Bailey Scholar, and a member of Sigma Chi fraternity.
He was a Lieutenant. In the U. S. Navy from 1962 to 1964 serving as an officer on the Destroyer, U.S.S. Leery DDR-879.
David began his professional career as a high school teacher in Hayward, California. In 1969, he started a long teaching and administrative career at Illinois State University in the Department of Curriculum and Instruction. He served on many University committees and developed the first academic support services for student athletes at ISU.
He was an accomplished photographer, a model train collector and enthusiast, a gardener and a manager of his farm in Nokomis. He enjoyed maintaining the family Cedar Line Farm in Marion, IL. He especially liked mowing the meadows with his big John Deere tractor. David played tennis and golf. At age 78 he was skiing the Black Diamonds at Vail, Colorado.
He was a member of New Covenant Community, Young Mens Club, KodaRoamer Camera Club, Bloomington-Normal Ski Club and the McLean County Historical Society.
Memorials may be made to the Cancer Research Foundation, New Covenant Community, or the University of Illinois YMCA.


To send flowers to the family or plant a tree in memory of David D. Rademacher, please visit our floral store.

To send flowers to the family in memory of David Rademacher, please visit our flower store.