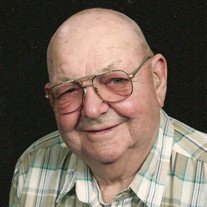 Per Dean's wishes, no visitation will be held. A celebration of life will be held at a later date in Bloomington. Donations in Dean's honor may be made to USS LST Ship Memorial, 840 LST Drive, Evansville, IN 47713. Kibler-Brady-Ruestman Memorial Home is assisting the family with arrangements.

Dean was born March 27, 1927, in Murrayville, Illinois to Roy V. and Mabel (McCurley) Blimling. He married Pauline Osborne on August 21, 1948, in Murrayville. She preceded him in death in August 2010. He was also preceded in death by his parents, and siblings Marjorie Kehl, John Blimling, Donald Blimling, Charles Blimling and Peggy Ash.

Dean served in the US Navy during WWII on LST 929H as a seaman first class. His working years followed involving multiple family ventures such as running a turkey farm with his wife, Pauline, and running a blacksmith shop with his dad. This time was followed by owning Dependable Dry Wall before retiring from Illinois State University Maintenance Department in 1989.

Dean was a life member of the VFW Post 454 in Bloomington and the American Legion in Normal. Dean and Pauline were also members of the First Presbyterian Church of Normal, IL.

Dean will forever be remembered for his yellow ruler suspenders, his love of his family and friends and his contagious chuckle that could fill a room.

Dean's family would like to extend their deepest appreciation to the Heritage Manor West Wing Staff, Normal, and the Transitions Hospice staff. Their level of care and attention provided great comfort to Dean and the family over the years and will never be forgotten.

Condolences and memories may be shared with Dean's family at www.kiblerbradyruestman.com

To send flowers to the family or plant a tree in memory of Dean William Blimling, please visit our floral store.

To send flowers to the family in memory of Dean Blimling, please visit our flower store.
Send a Sympathy Card