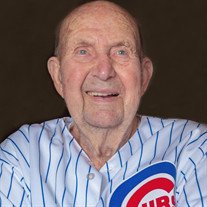 Litchfield - Delmar ‘Del' F. Beitz, 93, of Litchfield, formerly of Bloomington, passed away eight days after his beloved wife, Barbara, on Thursday, March 29, 2018 at 1:26 p.m. at Copper Creek Cottages in Litchfield.

His funeral service will be at 11:00 a.m., on Tuesday, April 3, 2018 at Trinity Lutheran Church in Bloomington with Pastor Thomas Wirsing officiating. Visitation will be from 5-8 p.m. on Monday at Kibler-Brady-Ruestman Memorial Home in Bloomington.

Interment will be in Park Hill Cemetery in Bloomington. Memorials may be directed to VFW Post 454 or LCMS World Relief and Human Care.

He was preceded in death by a son, Timothy Paul Beitz; grandson, Nicholas Rice; three sisters and a brother, who was killed in Italy in 1944 while Delmar was serving in WWII in Southern France.

Delmar proudly served in the United States Army during WWII. He was an electrical contractor and owner of Beitz Electric Co. Inc. in Bloomington, retiring in 1987.

Delmar was a lifelong fan of the Chicago Cubs, beginning in his early years when he listened to them on the radio with his mother.

He enjoyed family time, traveling & vacations, bowling, fishing & camping, and of course watching the Chicago Cubs. He proudly built two of their homes and at the second, spent 50+ years. At their farm he bred, raised and cared for many horses, including Arabians. After retirement, he loved playing golf, woodworking & spending winters in Florida.

Delmar was a loving husband, father and grandfather and will be greatly missed.


To send flowers to the family or plant a tree in memory of Delmar F. Beitz, please visit our floral store.

Please click here to view the video tribute
To send flowers to the family in memory of Delmar Beitz, please visit our flower store.
Send a Sympathy Card