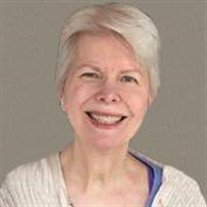 Her memorial service will be at 11:00 a.m. on Monday, October 3, 2016 at St. John's Lutheran Church in Bloomington with Pastor Brian Goke and Pastor Christine McNeal officiating. Visitation will be from 9-11:00 a.m. prior to the service at the church on Monday. Kibler-Brady-Ruestman Memorial Home in Bloomington is assisting the family with arrangements.

In lieu of flowers, memorials may be made in Diane's name to St. John's Lutheran Church or ALS Association Greater Chicago Chapter.

Diane was born on November 28, 1945 in Bloomington, Illinois, a daughter to Daniel A. and Alta M. Lockenvitz Laesch. She married Dennis Gieseke on June 10, 1967 in Bloomington.

She was preceded in death by her parents; brother, Steven Laesch; and step mother, Elsa Laesch.

Diane attended Valparaiso University in Indiana and graduated from Illinois State University in Normal. She was employed at State Farm Insurance in the Group Medical department, retiring in 2005.

Music was her passion, and she loved reading and the arts. She was also a Chicago Bears fan.

Diane was a loving wife, mother and grandmother and she will be truly missed.


To send flowers to the family or plant a tree in memory of Diane L. Gieseke, please visit our floral store.

Please click here to view the video tribute
To send flowers to the family in memory of Diane Gieseke, please visit our flower store.