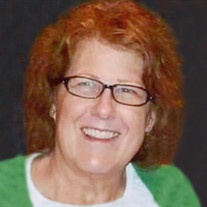 Bloomington - Diane K. Wickenhauser, 61, of Bloomington, passed away at 10:55 p.m. on Monday, December 18, 2017 at OSF St. Joseph Medical Center in Bloomington from complications of living with metastatic breast cancer.
Her memorial service will be at 11:00 a.m. on Saturday, December 23, 2017 at Kibler-Brady-Ruestman Memorial Home in Bloomington with Pastor Shelley Bauer officiating. Visitation will be from 9:00-11:00 a.m. prior to her service at the memorial home.
Memorials may be made to the Community Cancer Center in Normal.
Diane was born on December 20, 1955 in Bloomington, a daughter to Lloyd and June Anderson Schwartz. Diane grew up in Carlock, attending Unit 5 schools, graduating from NCHS in 1974. She attended Illinois State University where she was a member of the Intercollegiate Women's Golf Team, graduating in 1979. Diane stayed home with her children for many years before her 17-year employment with District 87. She married Dallas Wickenhauser on August 16, 1980 in Bloomington.
Surviving is her husband, Dallas Wickenhauser of Bloomington; her beloved three children, Holly Wickenhauser, Dustin (Autumn) Wickenhauser and Heather Wickenhauser, all of Bloomington; and the lights of her life, her grandsons, Leo, Owynn, and Tate, with baby boy #4 due in May. She is also survived by her brother, David (Carol) Schwartz of Carlock and her aunt and cousins in Texas.
She was preceded in death by her parents.
Diane loved cats, the Chicago Cubs, and feeding the squirrels, birds and chipmunks in her yard. She enjoyed sewing, reading and sunset cruises on the lake and big bonfires (with s'mores) at the family cabin, "Camp Wick." Diane was never without her camera in tow, and enjoyed gardening and playing in the dirt. She was a member of First United Methodist Church in Normal.
Diane extends her sincere appreciation for the extraordinary care and concern shown by Dr. Kathryn Widerborg, Dr. John Migas and the staff at the Community Cancer Center. The family would also like to thank the nurses and doctors at OSF St. Joseph Medical Center for their attentive care in Diane's last days.
She was a loving wife, mother, grandmother, sister and friend and will be greatly missed.


To send flowers to the family or plant a tree in memory of Diane K. Wickenhauser, please visit our floral store.

Please click here to view the video tribute
To send flowers to the family in memory of Diane Wickenhauser, please visit our flower store.