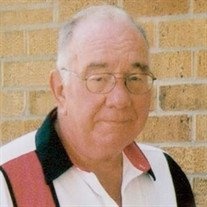 A visitation will be from 3:00-5:00 p.m. on Sunday, February 5, 2017 at Kibler-Brady-Ruestman Memorial Home in Bloomington. His funeral service will held at a later date with interment at Columbus Cemetery in Columbus, Nebraska.

Memorials may be made to Hudson Public Library or Hudson Ambulance Service.

He was preceded in death by his parents; two sisters in-law and two brothers in-law.

Don proudly served his country in the United States Air Force during the Korean War.

He was a graduate of the University of Nebraska and was a true Cornhusker fan. Don worked for State Farm Insurance in Lincoln, Nebraska and then moved to Bloomington where he retired after 34 years of service.

He was an avid hunter and fisherman and enjoyed the outdoors.

Don was loved by his family and a very special "Uncle Don" to his nieces and nephews.


To send flowers to the family or plant a tree in memory of Don E. Mueller, please visit our floral store.

To send flowers to the family in memory of Don Mueller, please visit our flower store.