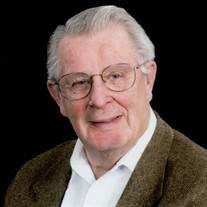 Normal - Donald Fred Gronert, 85, of Normal was called to rest at 9:30 a.m. on Wednesday, June 14, 2017 at Meadows Mennonite Retirement Home in Meadows, Illinois.

His funeral service will be at 10:00 a.m. on Friday, June 23, 2017 at Good Shepherd Lutheran Church in Bloomington with Pastor Chad D. Lueck officiating. Visitation will be from 5:00-8:00 p.m. on Thursday at Kibler-Brady-Ruestman Memorial Home in Bloomington. Military Rites will be accorded.

Interment will be in Elm Lawn Memorial Park in Elmhurst, Illinois. Memorials may be made to Good Shepherd Lutheran Church stained glass fund.

Don was born on January 6, 1932 in Chicago, Illinois, a son to Frederick Bernard and Esther Krueger Gronert. He married Audrey Mae Graunke on November 27, 1954 in Elmhurst, Illinois.

He was preceded in death by his parents; sister, Phyllis Petrosius.

Don proudly served his country in the Korean conflict faithfully in the 44th Army Core of Engineers. After returning home, he married his fiancé Audrey. He attended University of Illinois School of Architecture and graduated in 1959. His first position was in Normal, Illinois with Keith Middleton and Associates where he went on to design many of the local schools in the Unit 5 district.

In 1969, Don moved on to Caterpillar Tractor Company which used his talents for local as well as international expansion of the manufacturing giant's facilities. He retired from CAT in 1989 and formed his own firm for architecture and consulting. He continued to design churches, schools and luxury homes. Don finished his career designing over 200 Casey's convenience stores.

Don was a loving husband, father, grandfather and brother and will be deeply missed.


To send flowers to the family or plant a tree in memory of Donald F. Gronert, please visit our floral store.

Please click here to view the video tribute
To send flowers to the family in memory of Donald Gronert, please visit our flower store.