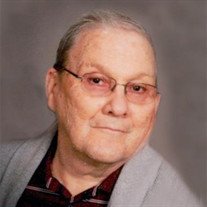 His funeral service will be at 11:00 a.m. on Saturday, November 4, 2017 at Christ Lutheran Church in Normal with Pastor Jonathan Huehn and Pastor Timothy Fitzner officiating. Visitation will be one hour prior to services at the church on Saturday. Kibler-Brady-Ruestman Memorial Home in Bloomington is assisting the family with arrangements.

Interment with Military Honors will be in East Lawn Memorial Gardens in Bloomington. Memorials may be made to Christ Lutheran Church.

Donald was born on June 19, 1928 in Rockford, Illinois, a son to Colin Billings and Ann Buffo Manahan IV. He married Wilma Marcille Walker on January 14, 1955 in Washington DC.

He attended La Salle-Peru-Olgesby Community College in La Salle and later graduated from Illinois State Normal University with a Masters degree in Education in 1963. Donald was blessed to work with young people, first as a teacher and later as an Administrator at Unit 5 Schools, then as an I.S.U. Clinical Assistant Professor, retiring in 2011.

Donald was a member of Christ Lutheran Church in Normal where he served on the Board of Christian Education and as an elder for many years.

He enjoyed traveling, gardening and spending time with his family. Donald was loved by his family and enjoyed by his friends.

The family would like to thank the nurses, CNA's and staff at OSF Hospice Region 4 for their care. A special thank you to caregivers, Carol, Lance and Debi.


To send flowers to the family or plant a tree in memory of Donald Frank Manahan, please visit our floral store.

To send flowers to the family in memory of Donald Manahan, please visit our flower store.