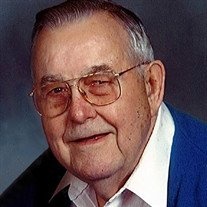 His funeral service will be at 2:00 p.m. on Thursday, January 2, 2020 at Kibler-Brady-Ruestman Memorial Home in Bloomington with Rev. Andrew Gifford officiating.

Interment will be at East Lawn Memorial Gardens in Bloomington. Memorials may be directed to St. Luke Union Church or to an organization of the donor's choice.

Donald was employed at Eureka Williams for 38 years, working as a machinist until his retirement in 1988. He was a member of St. Luke Union Church in Bloomington.


To send flowers to the family or plant a tree in memory of Donald Eugene Mason, please visit our floral store.

To send flowers to the family in memory of Donald Mason, please visit our flower store.
Send a Sympathy Card