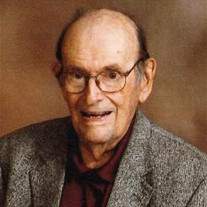 Donald D. "Don" McGillivray, 90, of Boerne, Texas, formerly of Bloomington, passed away November 14, 2018 at his retirement community, Morningside Ministries at Menger Springs, in Boerne, Texas.
His memorial service will be at 10:30 a.m. on Saturday, May 18, 2019 at Kibler-Brady-Ruestman Memorial Home in Bloomington. Visitation will be from 9:00-10:30 a.m. prior to services at the memorial home.
Inurnment will be in Funks Grove Cemetery in McLean, Illinois. Memorials may be directed to Illinois Agricultural Leadership Foundation, 402 N. Hershey Road, Bloomington, IL, 61704.
Don was born on August 28, 1928 in Muscatine, Iowa, the only child of Walter Clark and Pearl Elizabeth Potter McGillivray_. He married Betty Jo Anderson on June 24, 1951 in Muscatine, Iowa.
Surviving is his loving wife of 67 years, Betty McGillivray of Boerne, TX; two daughters, Ann (Tim) Barsch of Fredericksburg, Texas and Jean (Doug) Pitts of Glen Mills, Pennsylvania; four grandchildren and three great grandchildren.
He was preceded in death by his parents.
Don grew up on a farm near Muscatine, Iowa and attended a one room country school through the eighth grade. He attended and graduated from Muscatine High School where he was a member and held offices in both 4-H and FFA, receiving the State Farmer Degree in 1946. He graduated from Iowa State University in 1950 with a Bachelor of Science Degree in Agronomy.
Upon graduation, Don joined Funk Seeds International as a production supervisor at the company's Belle Plaine, Iowa operations. After serving two years in the United States Army from 1951-1953, he returned to Funk Seeds as a plant breeder, a position he held for seven years. Don later became assistant manager and then manager of Funk's Iowa-Minnesota-Wisconsin operations before transferring to Bloomington, Illinois in 1970 as manager of hybrid corn operations. In 1975 Don was promoted to Vice President of Operations for Funk Seeds and in 1982 became President. In July of 1989 Don retired from Funk Seeds, which is now part of Syngenta Seeds, and continued with consulting activities in the seed industry.
Outside of his career at Funk Seeds, Don has been active in a number of organizations. He is a Past President of the American Seed Trade Association from 1988-89 and continued on the Board of Directors. He also served as Chairman of the association's Hybrid Corn and Sorghum Division and was active on several committees of the association. In 1996, Don was recognized for his service to the seed industry by being named a Lifetime Honorary Member of the American Seed Trade Association.
Don has served as a board member of the U.S. Grains Council and a board member and Past President of the American Seed Research Foundation. He is also a member emeritus of the Illinois Agricultural Leadership Foundation serving as Chairman from 1990-2000. Don also has been a Director of the Illinois State 4-H Foundation.
In his home community of Bloomington, Illinois, Don was a member of the Exchange Club of Bloomington and a member and Past President of the BroMenn Hospital Advisory Council. He has served on the Illinois Wesleyan University Associates Board, was a member of the Illinois State Senior Professionals and volunteered at Habitat for Humanity Resale Store. Don and Betty were 45 year members of First United Methodist Church, Normal, Illinois.
Don loved to play golf and was a member of Bloomington Country Club. He also enjoyed spending winters at their second home on Lake LBJ, Horseshoe Bay, Texas. In 2015 Don and Betty moved to a retirement community in Boerne, Texas near their lake home.


To send flowers to the family or plant a tree in memory of Donald D. McGillivray, please visit our floral store.

To send flowers to the family in memory of Donald McGillivray, please visit our flower store.