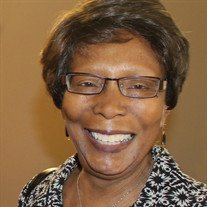 Her memorial service will be at 11:00 a.m. on Saturday, October 6, 2018 at Wayman AME Church in Bloomington. Kibler-Brady-Ruestman Memorial Home in Bloomington is assisting the family with arrangements.

Memorials may be directed to Wayman AME Church where Lorraine was a longtime member.

Lorraine was born in Camden, South Carolina on August 15, 1947, a daughter to George and Daisy Alexander Thompson. She married Harry W. Hightower on December 27, 1969, he preceded her in death in 2001.

She was preceded in death by her parents, husband, and brother, Michael Thompson.

Lorraine, graduated from St Paul's College (Virginia) with a degree in Education. Employed by Ryder in Normal for many years. She was avid bicyclist and terrific mother to her sons and friend to many others.


To send flowers to the family or plant a tree in memory of Doris Lorraine Hightower, please visit our floral store.

To send flowers to the family in memory of Doris Hightower, please visit our flower store.
Send a Sympathy Card