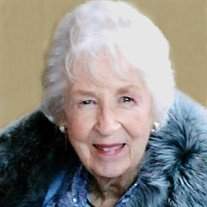 Dorothy was born on January 30, 1921 in Taylorville, Illinois, a daughter to Dr. William and Anna Shaw. She married Irving J. "Dave" Davenport in San Diego, California on January 12, 1944. He preceded her in death in 2008.

Dorothy is a graduate of Pawnee High School and the University of Illinois. She was a member of the Alpha Gamma Delta Sorority, The Dozen Club, Chapter HP PEO, Bloomington Country Club and Second Presbyterian Church.

Before marriage, Dorothy was a librarian at the State of Illinois Library in Springfield, Illinois. After marriage, her family was her treasure and her lifelong " career". As the wife of a naval officer, Dorothy moved numerous times before settling, after retirement from the Navy, in Bloomington, Illinois. She and "Dave" shared the love of traveling both in the United States and abroad with family and friends.

Family and friends were the " treasures" of her life, as previously mentioned and Dorothy was a treasured blessing to her family and friends. Her smile and the twinkle in her eyes lit up so many lives. She will be missed beyond words!


To send flowers to the family or plant a tree in memory of Dorothy J. Davenport, please visit our floral store.

Please click here to view the video tribute
To send flowers to the family in memory of Dorothy Davenport, please visit our flower store.